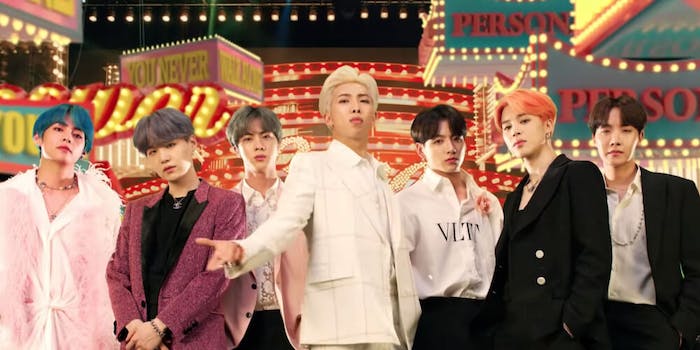 BTS joined TikTok–and stans are already flocking to the platform

BTS just joined on TikTok, and they already have 1 million followers.

Their username on the short-form video sharing app is @bts_official_bighit. A few hours upon joining, BTS uploaded their first-ever TikTok video, featuring the group posing while “Boy With Luv” plays in the background. It has since been liked over two million times.

A second video was uploaded hours later and was received with similar excitement from ARMY by receiving millions of views.

Some BTS fans are crediting–or blaming, rather–Jungkook, one of the group’s members, for the decision to finally move over to TikTok.

how much did jungkook pay u

u cant convince me that bts opening their own tiktok wasnt 100% jungkook’s idea after stumbled onto this edit on his side account pic.twitter.com/LnO4cUxsyt

Others are just excited to see more of the group, even if it means having to download yet another app.

“Y’all really gonna make me download tiktok, the things I do for love,” another user lamented.

me: i hate tiktok

bts: we opened a tiktok channel!

me contemplating the biggest life decision of downloading the tiktok app only because for the seven men i love: https://t.co/eZ2E0uOGUB

Where's my " i downloaded tiktok just for bts" squad at? pic.twitter.com/QTEaS3VQNS

I really just downloaded tiktok the things I do for BTS pic.twitter.com/l7Kxp1doWL

anti tiktok army’s rising from the dead to download tiktok because of bts pic.twitter.com/pXPpgUNJZe