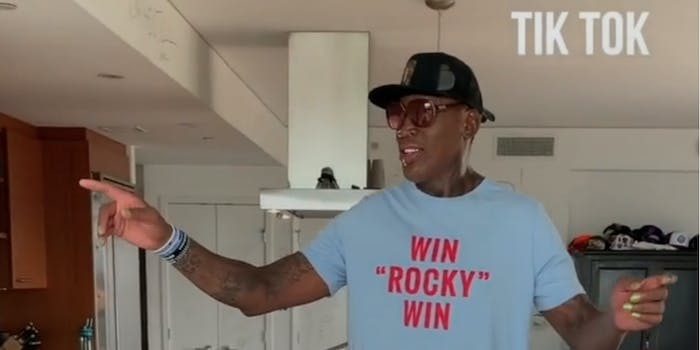 The former NBA player signals a different kind of celebrity wave on TikTok.

Celebrity presence has been pretty minimal on TikTok, but Dennis Rodman recently joined the platform, and his first TikTok is an artist statement of sorts.

The former NBA player utilizes the text feature to express concepts like “love,” “hate,” “flopping,” and “Lebron,” all while appearing to fight or embrace the words. Owl City’s “Fireflies” soundtracks the clip.

People quickly started dueting with the video. Or at least reacting to it.

Rodman, who just a year ago cried on CNN while wearing a Make America Great Again hat, only has three TikToks up as of Thursday, and the most recent one features him brushing his teeth with a “motor brush” he “found” at a friend’s house. Another one is just him working out.

Rodman was supportive of TikTok phenom Lil Nas X when “Old Town Road” was removed from the country charts in March, so perhaps he was inspired to join. Or maybe this signals a different kind of celebrity invasion on TikTok. Howie Mandel is on there too, pouring water on his head to the Stranger Things theme.