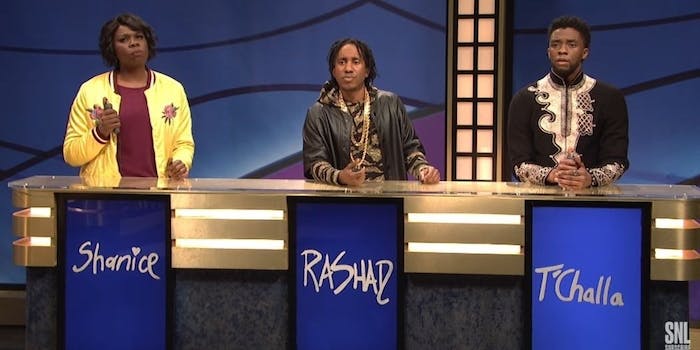 Black Panther plays ‘Black Jeopardy’ on ‘SNL,’ and the results were hilarious

It didn’t take him long to get the hang of the game.

Saturday Night Live’s “Black Jeopardy” usually puts hosts like Louis C.K. or Elizabeth Banks into an uncomfortable situation or shows Donald Trump supporters who seem to be on the verge of racial understanding. But the latest episode featured T’Challa from Wakanda who had some limitations of his own.

T’Challa, of course, is Black Panther, and he had to compete against his opponents in such categories as “Grown Ass,” Aw Hell Naw,” and “Girl, Bye.”

T’Challa, played by host Chadwick Boseman, had plenty of well-reasoned takes for the show, causing Kenan Thompson to make this face.

Eventually, though, Black Panther gets the hang of the game and gives a wonderful answer when asked for his reaction to a white woman named Karen bringing potato salad to a cookout. Watch the sketch below.