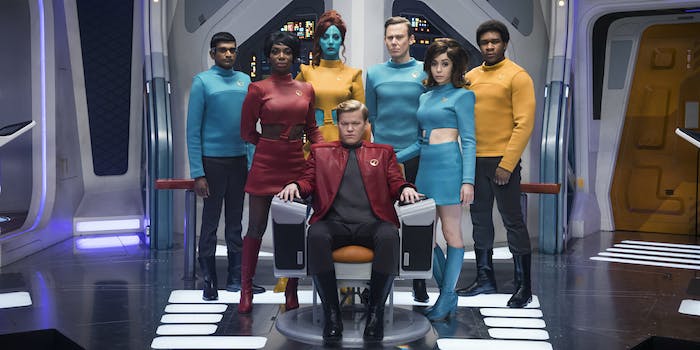 ‘Black Mirror’ is as creepily timely as ever on season 4

The season is anchored by 2 standout episodes.

Black Mirror season 4 debuting at the tail-end of 2017 is a welcome gift. The “reality is an episode of Black Mirror” refrain is still relevant in these surreal times—most recently, people have been getting weird vibes from the wildly popular iPhone game HQ Trivia. But you can take your pick of moments this year that elicited dread or made you wish you could block people in real life. At this point, Black Mirror is almost a respite.

In season 4, the series is sewn even closer to reality via two episodes where technology—as always—is integral, but broken humanity is the ultimate source of dread. The first is “USS Callister,” which presents Black Mirror in space—a welcome premise. Jesse Plemons (Fargo) stars as the captain of the USS Callister, which appears to borrow its hues and design from Star Trek. Chewing Gum’s Michaela Coel, Westworld’s Jimmi Simpson, and How I Met Your Mother’s Cristin Milioti are among his crew, but the episode painstakingly builds from that premise, offering up a critique of men in power and what women who work with them must endure. Plemons plays the “captain” with winking charisma but also presents a man who is weak and insecure, offering up a character both repellant and sympathetic. Given the parameters of the episode, there’s a secondary critique of gaming culture and its objectification (and harassment) of women. Perhaps it wasn’t aiming to be as prescient, but this is Black Mirror, after all.

After season 3 was released last year, series creator and co-showrunner Charlie Brooker pushed the idea of an extended Black Mirror universe. “USS Callister” could link to last season’s augmented-reality thriller “Playtest.” “Hang the DJ” could exist in the same social-climbing universe as season 3’s “Nosedive,” sketching out a world where young people’s only responsibility is to find a life mate, with the help of an app, of course. This is season 4’s only “relationship” episode, but it doesn’t reach the same ecstatic heights as season 3’s Emmy-winning standout “San Junipero.”

The Jodie Foster-directed “Arkangel” furthers the series’ conceit of blocking someone in real life—an extension of the universe presented in season 1’s “The Entire History of You” and season 2’s “White Christmas”—as a mother (Rosemarie Dewitt) tries out an experimental technology on her daughter. The implications are, predictably, not good, but the episode is especially relevant right now, as YouTube scrambles to dismantle disturbing kids’ content and stop its (apparently lucrative) proliferation. Despite the technology, it’s one of the more humanist episodes.

Staying on the memory thread, “Crocodile” is a muted look at a device that accesses memories, but the John Hillcoat-directed episode never quite finds its center or gives its antihero much of a personality. “Metalhead” is the least engaging episode, plot-wise, though it does rank in terms of sustaining anxiety. A woman is hunted through the lush countryside by a murderous robotic canine, and there’s never a moment when you think this won’t end badly.

The season’s other anchor is “Black Museum,” directed by Peaky Blinders’ Colm McCarthy. A young woman (Letitia Wright) stops by an isolated roadside museum of criminal artifacts and meets owner Rolo Haynes (Douglas Hodge). Holding the thread of “White Christmas,” Haynes inhabits Jon Hamm’s con-man character, telling three stories that set up the final act. While the first two stories are interesting, I wish the whole episode had been about the final one: “Black Museum” could be seen as inhabiting the same universe as episode 2’s controversial “White Bear,” in which the suffering of people of color is a spectator sport. There are many layers to peel back there.

This season zooms out a little more, presenting the extended universe theory via a smaller detail—one that’s fun to spot on your own. It posits that maybe we’re all part of the same consciousness, but it doesn’t make the themes any easier to absorb.