Black Mirror season 3 has debuted on Netflix and lists have swiftly been made ranking the six episodes. It’s a show that elicits passionate feedback, and perhaps that’s by design. But maybe we should be looking at the show as a whole rather than its parts.

Showrunners Charlie Brooker and Annabel Jones are halfway through shooting season 4, but with the latest season they’re building on what appears to be a Black Mirror universe—one that extends to real life, if social media is to be believed. A scroll through Twitter confirms that many people think reality is like an episode of Black Mirror. How should Brooker and Jones take that?

“It’s good publicity for the show but terrible news for humankind,” Brooker tells the Daily Dot. “If somebody invents a 3D printer that squirts emojis at you, that’s like Black Mirror. If Donald Trump does anything, Black Mirror. Brexit, Black Mirror. There’s no shortage of fucked up-edness.”

“I think we take it as a compliment,” says Jones.

One of the most terrifying episodes is the Dan Trachtenberg-directed “Playtest,” in which an American tourist named Cooper (Wyatt Russell) is roped into demoing a new “personal survival” game that makes you literally confront your own fears via augmented reality. Brooker says he wanted it to be a “haunted house story,” and in a recent Reddit AMA, he and Jones talked about creating something like a “nightmare mode” for people watching a second time, making it more interactive. Could that happen in the future?

“We did have this crazy notion that if you played it a second time, the moment when Cooper goes into the bedroom and Katie’s taunting him over the earpiece, I wrote a version of it where he goes into the room and sees Victoria from [season 2’s] ‘White Bear’ and then he starts seeing things from other previous episodes and it goes really bizarre and breaks the fourth wall completely,” says Brooker. “And then he starts smashing the screen that you’re watching him on.

“The idea was that it was an elaborate Easter egg for viewers who’d played it a second time… Logistically it would have been extremely expensive and a logistical nightmare. We had to abandon the idea but that’s not to say we wouldn’t in the future go forward and do… a more vaguely interactive thing.”

Cooper approaching the bedroom in “Playtest”

He adds that he asked Netflix if it was possible to have Cooper’s tether to reality, Katie (played by Wunmi Mosaku), address viewers in different cities, to break the wall even further. Going more meta, the episode features several video game Easter eggs. And another reference to “White Bear.”

So is there something of a Black Mirror extended universe? Yes, and it’s connected with “string,” jests Brooker. Furthering that idea, he notes the status update from Prime Minister Michael Callow (“National Anthem”) on a phone in season 3’s “Nosedive,” which is itself a reference to last summer’s #piggate. Victoria from “White Bear” shows up in season 3’s “Hated in the Nation,” as does Callow—both via the internet.

Brooker also wants to market webcam covers branded with Kenny’s mom from season 3’s “Shut Up and Dance,” a highly divisive episode about malware, extortion, and blackmail. (A Waldo sticker on a laptop references season 2’s “The Waldo Moment.”) 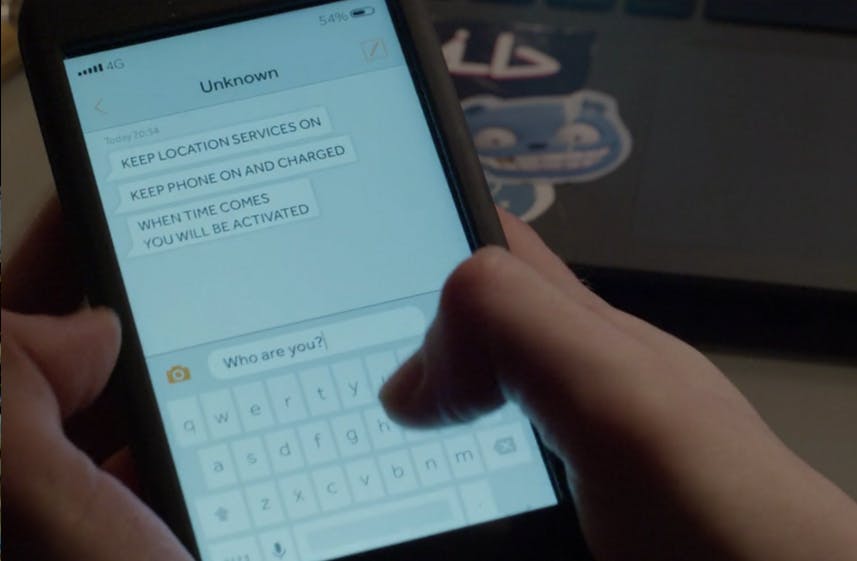 Appropriately, Brooker explains that the initial idea for “Shut Up and Dance” made him laugh, unfolding something like Reservoir Dogs.

“Open with guys being told the part they’re being made to play,” he says. “A heist movie. These are all strangers being blackmailed. That was the initial thought behind it. In discussion, you come to a place where, as we often do, you take an idea that’s a comic one and play it straight to the grim conclusion. [There’s] lots of grim comedy in that episode… [Some think] it’s nail-biting and harrowing and others can’t see the point of it. That’s the nature of the beast.