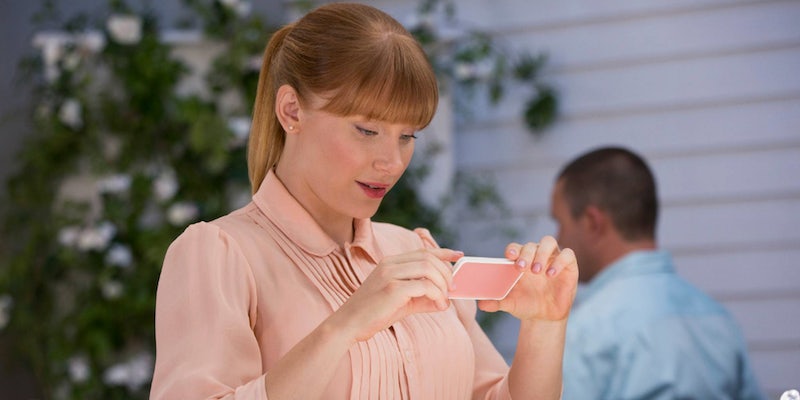 Since its Channel 4 debut in 2011—followed by a fate-sealing Netflix release in 2014—fans have often embraced Black Mirror as a fictional, cautionary tale of what could happen if we look into the void too long. Online, however, many have remarked that certain events have made reality feel increasingly like an episode of Black Mirror.

With its third season, the six-episode series pivots from prescience to commentary on the void.

In the time between seasons, we’ve seen an election cycle several shades darker than season 2’s “The Waldo Moment.” (Waldo was apparently modeled after “quasi-Trump” politician Boris Johnson.) The second-season episode “Be Right Back,” which concerns a woman who loses her fiancé and uses a virtual substitute to keep talking to him, is a bridge to Eugenia Kuyda, who did something similar after her best friend passed away. In an interview with the Guardian, Brooker commented on the tech/human divide at the center of the series: “We’re good at inventing the miraculous tools; not so good at evolving to deal with them.”

That’s explored in season 3’s “Nosedive,” written by Parks and Recreation’s Rashida Jones and Michael Schur. Last year’s controversy around Peeple, an ill-advised app that rates people, made us analyze the limits of narcissism online. Here, Bryce Dallas Howard is the perpetually pleasant Lacie, a woman who strives for positive ratings in a world where that app’s conceit is real, downvotes can break you, and a “meaningful encounter” is open to interpretation.

The flipside is “San Junipero,” which takes place in a California beach town circa 1987 and follows a love story between two women (Gugu Mbatha-Raw and Mackenzie Davis). The build-up requires commitment, but the third act gives some emotional weight to “meaningful encounter” and the idea of augmented realities.

Brooker explores video-game culture in “Playtest” and “Men Against Fire,” but the former, directed by 10 Cloverfield Lane’s Dan Trachtenberg, zeroes in on a more progressive type of virtual reality: an experimental “personal survival horror game” that, of course, does not go well. It finds a nice parallel with the moral dystopia of HBO‘s Westworld.

The episode that mirrors season 2’s “White Bear,” in terms of blood pressure-escalating tension, is “Shut Up and Dance.” Malware and ransomware provide the thread, but it drags on and leans too heavily on the thriller storyline. Considering these kind of threats can actually ruin people’s lives, a look at motivations might have helped elevate it.

Some of the episodes feel more like extensions of the previous seasons’ themes than new ideas, but the season creates a sweet spot where fans and newcomers can find something of interest. “San Junipero” and “Playtest” are the two that could be fleshed out into feature films, but the former is one of the sole Black Mirror episodes that offers a positive outlook on future technology. Will it be a reality by next season?