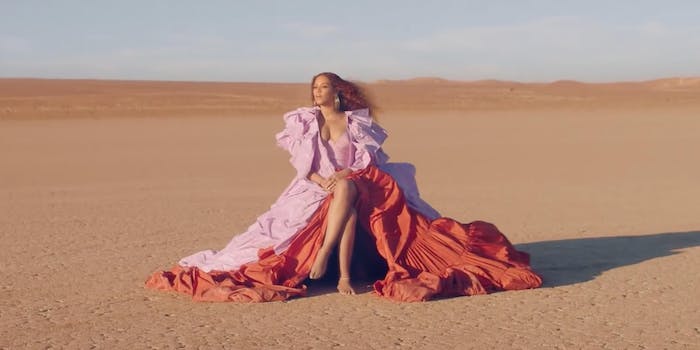 It really makes you think.

Stan Twitter is at it again, this time with a conspiracy theory about the way Beyoncé poses her arm in recent Instagram posts.

This Bey Hive conspiracy doesn’t have a lot of explanation. From the images tweeted by user @Abbyweaver34, it’s pretty clear that Beyoncé’s fans think the artist is releasing her seventh album in the near future and is signaling this with the use of posed photos. See how she’s making a “7” in each pose?

This isn’t the musician’s first time featured in a conspiracy theory. Beyoncé has been the subject of several of them surrounding previous album releases, her children, the Illuminati, and even her relationship with sister Solange.

As far as Bey Hive conspiracy theories go, this one is fairly tame. However, not everyone is on board. The thread is full of people who think this is a reach or, better yet, a joke.

Somehow this theory has evolved to include Beyoncé’s daughter, Blue Ivy Carter, whose birthday is Jan. 7.

“My bachelor’s [degree] in Hive Mathematics is paying for itself,” one user wrote.

My bachelors in Hive Mathematics is paying for itself

Hive members have even gone so far as to use other languages to interpret their queen’s poses as another hint at an album release.

As with any Beyoncé conspiracy theory, whether it’s that she’s queen of the Illuminati or actually Solange’s mother, the jokes and criticism came flooding in all over Twitter.

Still, there is another conclusion to draw from these photos that isn’t related to Beyoncé’s music.

“All this tells us is she needs to learn new poses,” a user wrote.

All this tells us is that she needs to learn new poses.