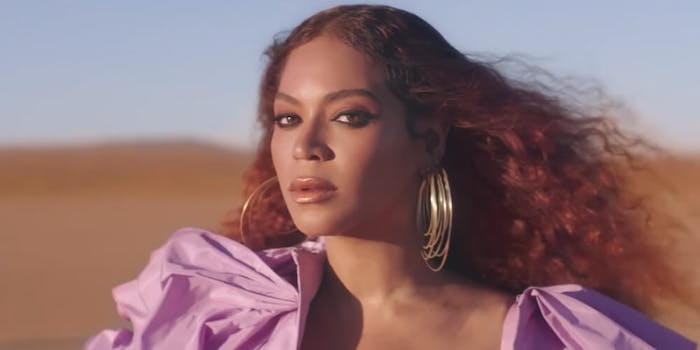 Stans are using pictures of Beyoncé to catfish sugar daddies

The trend of using celebrities to create fake profiles is not new, nor is the idea of using fake pictures for online dating. In fact, the series Catfish is still going strong in its seventh season thanks to the prevalence of catfishing.

Yet, it still seems incredible that anyone can use a picture of Beyoncé and the receiver not recognize who she is.

One Beystan shared an alleged conversation between them and the “sugar daddy” they fooled by using photos of the icon.

“I found sugar daddy,” Twitter user @beyhive wrote. In the conversation, another Twitter user slides in their DMs to ask, “If you real let me see your real picture.” So beyhive obliges by sending a selfie of Queen B. The man replies, “Wow you look amazing.” (I mean what were you expecting a Beyoncé stan account to do?)

After being sent more Beyoncé photos, he asks, “Are you a model” and “Where are you from?”

Beyhive responds by saying that they’re from Houston, Texas, where Beyoncé notoriously hails from.

It’s apparently common to use Beyoncé’s photos to catfish, because in the replies of beyhive’s viral tweet, users shared doing the same.

“I did this too,” Teyoncé replied, along with their own success story. In Teyoncé’s screenshots, a man asks for “Your pic plz.” Teyoncé replies, “You want to see what I look like?”

“Yes I want to,” the man says. So Teyoncé sends a selfie of Beyoncé.

The man responds, “Bebs it’s u really.” Teyoncé confirms that it’s them.

Another user, who has Beyoncé as their Twitter header, shared that they too did the same.

In @felitoespi’s screenshots, they sent a Beyoncé photo to someone with a photo of their abs as their avi (they’re probably a catfish too, so it’s only fair). Abs asks, “Wow nice. Is this ur pic. U look different.” And felitoespi had their lies prepared. “Cause of my hair and braids. Lighting is different and shit cause filters and sun. I used to bleach my skin and stopped at the age of 14.”

The explanation seemed to do the trick because abs simply responded, “Yeah. Ohh.”

In yet another success story, Twitter user @kashham2 shared a portion of their catfishing conversation with a man.

“Send ur pics i want to see you,” the man asks. So kashham2 sent two professional photos of Beyoncé at a concert.

The seemingly somewhat skeptical man then questions, “it’s u?” But he was convinced with a simple “yup.”