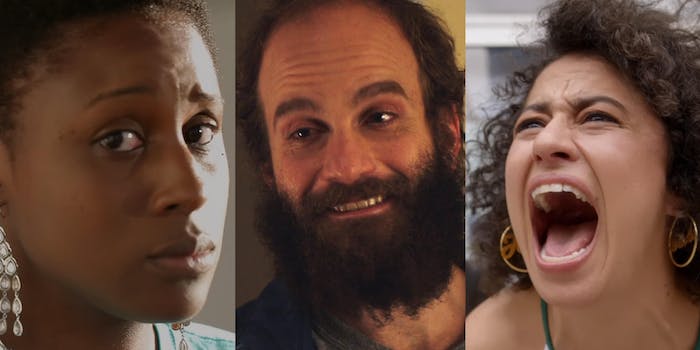 The webseries that defined the decade

Over the last decade we became more plugged in than ever, and that transformed how we consume content. Streaming, once an innovative experiment, took over and binge-watching became our new normal. But technology also transformed the very content we watch. You could say the internet democratized content. Thanks to video uploading services like YouTube and Vimeo, aspiring creators could bypass television executives. This meant diverse voices could take risks, self-producing unique ideas, and sharing them with an audience. By the end of the decade, some of the most successful and iconic shows on premium and cable TV like Broad City, High Maintenance, and Insecure, were ones that had gotten their start as a webseries.

The timing of the most successful web series of the decade coincided with YouTube’s 2010 redesign. In an effort to streamline viewing, and keep viewers watching longer, YouTube decluttered the site. The platform became a tool for engaging an audience for longer periods of time and creators seemed to simultaneously take an interest in sharing longer-form content to the site.

Here’s a look at the web series that defined the decade and their lasting impact today.

Best webseries of the decade

In many ways, Broad City was the Seinfeld of webseries. It was a show about nothing, or to be more precise, the way the nothingness of daily living can give way to neuroses. But instead of starring a vaguely successful male comic who inexplicably dated a new model every week, Broad City featured two female unknowns who weren’t even pursuing success or any real career to speak of. They were just sort of existing in New York City.

It’s hard to imagine a pre-webseries world in which creators and stars Abbi Jacobson and Ilana Glazer could have successfully pitched their series to a major network, or even to a smaller cable outlet. They created their show at a time when male voices were still dominant in comedy, and buddy stoners were most definitely always portrayed by men. But thanks to the internet, they built a steady if niche following. The duo used their comedy connections to land a meeting with Amy Poehler. Despite Poehler’s support, commercial success did not come instantly. The twosome had a failed pilot at FX before they sold their series to Comedy Central.

The TV show they ended up creating is arguably louder, zanier, and lot less realistic than their original webseries, but it retained the original kernel of a throughline: It tells the story of two women who explore but never climb to new heights. They’re broke, imperfect, and often fail. And yet they’ve become aspirational icons thanks to their knack for facing challenges with humor and tenacity.

Perhaps one of the most important effects of the rise of the webseries is that it gave a platform to creators of color. While Hollywood had already made room in the previous decade for heart-wrenching and dramatic shows like The Wire and The Blindside, at the beginning of the decade we sorely lacked content where Black people were portrayed as ordinary. It wasn’t until mid-decade that family sitcom Blackish debuted on ABC.

In a 2014 interview, Rae told the Daily Dot, “Whenever there are white men who are dealing drugs, it’s like this brilliant character. He has to do it because he has cancer and it’s the only way he can take care of his family. If a Black guy did it, it would be like, ‘Well, that’s what they do anyway.’”

With Awkward Black Girl, Rae turned the status quo on its head. The series featured Rae as the titular protagonist, a pleasant but anxious woman who navigates the worlds of work and dating with a lot of earnest effort and very little grace. In the first episode of the series, Rae sings along enthusiastically to a gangsta rap song while driving to work, but when an acquaintance catches her she’s instantly mortified, revealing that she isn’t tough at all, she’s just a fan enjoying a fantasy that’s only comfortable given a certain amount of privacy. In making fun of herself, Rae helped to make Black characters more relatable and real. We’re still feeling the impact of her seemingly simple choices today.

It took years for Rae to get Insecure developed and produced. In 2015, the New York Times ran a piece questioning why Rae wasn’t getting more mainstream recognition and success. After all, Awkward Black Girl had gone viral four years earlier. She’d written a best-seller, The Misadventures of Awkward Black Girl, and she had proven many times over that viewers were hungry for the kind of content she was capable of creating.

At the time Insecure was in development, and would eventually air to great critical success. But Rae’s long journey to success is a reminder of how important access to a platform and an audience are for creators of color. Without the advent of the webseries, her voice and her memorable characters might never have made the air.

Much like Broad City, High Maintenance featured people in New York doing a whole lot of nothing. And yet, it became a show about everything. Following a weed delivery guy, simply named “guy,” the show offered a glimpse into the apartments and lives of diverse New Yorkers. From loneliness, to anxiety, to love, to death, High Maintenance tackled deceptively deep topics with remarkable buoyancy and grace.

In 2013, co-creator and star Ben Sinclair told Rolling Stone, “The weed delivery guy is the only stranger you let inside your home. You let him in because you really need to relax. In a way, the show is about the depression that hums in the background of your life, and how people treat it with weed.”

The first episodes were released for free on Vimeo in 2012 by series creators Katja Blichfield and Ben Sinclair. Thanks to the success of the series Vimeo partnered with the team to make season 2 an exclusive paid release on the Vimeo platform. High Maintenance’s enduring success behind the paywall proved that people were willing to pay for quality content. The series was eventually bought by HBO where it debuted in 2016 to lasting success.

While the idea of centering a weed delivery guy and his customers may not seem revolutionary at its surface, the intimacy of the stories High Maintenance manages to tell, paired with its ability to zoom out to a broader shared experience make it a highly original show. There was nothing like it on TV when it hit the web in the early 2010s, and, you could argue, there still isn’t.

Zach Galifianakis’ surreal Funny or Die talk show pushed the boundaries of celebrity worship in ways that changed the late-night talk show circuit as we know it.

Although it technically began before the decade started, Between Two Ferns‘ impact was felt well into this one. Series host Galifianakis interviewed numerous icons in the 2010s, including spiraling pop star Justin Bieber in 2013 and President Barack Obama in 2014. His interviews underlined what is both appealing and sickening about the Hollywood machine, and Galifianakis never held back, often antagonizing his guests and saying the most inappropriate thing possible. By taking seemingly untouchable figures and poking fun at the niceties of typical talk show dialogues, Galifianakis upended the form, forcing his guests and audiences to question the absurd reverence with which we treat celebrities. Part of the fun, for example, in watching his Obama interview is seeing Obama volley zingers back to him. It’s as if the whole structure of a friendly celebrity interview is unraveling before our eyes, and the effect is as fresh as it is energizing.

In 2016, Galifianakis told the Los Angeles Times that he thought Between Two Ferns had run its course, but in 2019 Netflix released a feature-length Between Two Ferns movie. The story Galifianakis builds, about a man on a mission to keep making his show and “make it big” feels as urgent as it does dumb. You could say Between Two Ferns brought the self-awareness of the internet—where there is always an ongoing dialogue and commentary present—into a space where it normally would have been erased in favor of something shinier and more polite.

Streaming services may have taken over, and it’s less common for an independent webseries to gain traction these days. But the impact of these iconic webseries over the last decade is undeniable. From changing archetypes to subverting form, the webseries allowed independent content creators to influence the mainstream, and the 2010s were better for it.