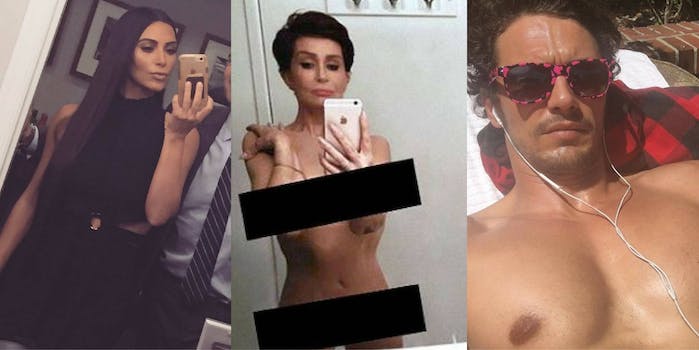 The celebrity selfies that almost broke the internet in 2016

What a year for nearly nude photos.

The Year of our Lord 2016 may have been one hell of a trash fire, but it didn’t pass without its fair share of fire selfies along the way.

According to Google, these are the celebrities whose selfies dominated the internet this year.

Kim K. broke the internet for the second year in a row with this nearly nude mirror pic.

When you’re like I have nothing to wear LOL

Osbourne followed suit with this selfie in solidarity of Kardashian-West.

@kimkardashian you inspired me! #liberated #thetalk

Usher shocked the web when a snap of shower time got a little too “R.”

Stan’s selfies received quite a bit of love after the premiere of Captain America: Civil War.

Where is the elevator? #cfdaawards2016 congratulations #toddsnyder nominated for menswear designer of the year and thank you for having me in your corner! Let’s win this! #monumentsmen @willmalnati where are you

Say what you will, but President-elect Donald Trump won quite a few wins with his post-election supporter selfies.

Jared Leto gave us something to smile about with this Suicide Squad selfie in his Joker get-up. Too bad the movie wasn’t as good as his character’s costume.

Google searches for Coco Austin’s selfies spiked after she announced new pieces for a lingerie line on Instagram earlier this year (despite the fact that these announcement photos were not selfies).

Chanel & I having fun with the mirror above our bed.. I need one of these at home..LOL #Twinsies

James Franco’s selfies, for whatever reason, were extremely popular over this past year in general. Google Trends reveals no special significant spikes in searches for his selfies.

He did post a notoriously nearly nude pic in 2014, however, which was immediately followed by a social media sabbatical. Perhaps that’s what fans are searching for?

Selfies by the pool🌺

Katy Perry‘s selfie searches also peaked after she appeared in a Funny or Die sketch where she “voted while naked.” Alas, she didn’t post an actual selfie to go along with the sketch.