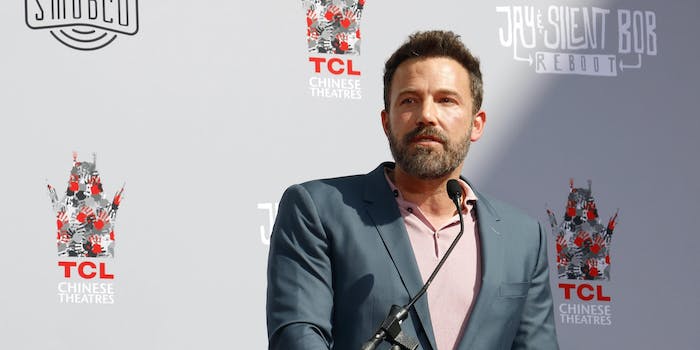 Ben Affleck explains why he lied about his back tattoo

'I resented that somebody got a picture of it by spying on me.'

Back in 2015, paparazzi photos of Ben Affleck with a massive phoenix tattoo on his back emerged online, leading him to deny that it was his tattoo to Extra—and explain that it was actually for a role. Several years later, Affleck is finally owning up to what most people had already figured out about that infamous (and widely mocked) back tattoo.

The latest confirmation comes courtesy of a New York Times profile on Affleck, where he goes in-depth about his new role in The Way Back, his alcoholism and sobriety, and the rough patches in his life.

The tattoo comes up when Affleck discusses certain values, such as honesty and accountability, that come with recovery, to which reporter Brook Barnes points out that he lied about the back tattoo.

While Affleck might’ve somewhat regretted how the picture came out or how he might’ve handled that initial question, he also presents a very relatable explanation for why he did it: It was probably fun to screw around with Extra.

“I resented that somebody got a picture of it by spying on me,” Affleck explained. “It felt invasive. But you’re right. I could have said, ‘That’s none of your business.’ I guess I got a kick out of messing with Extra. Is your tattoo real or not real? Of course, it’s real! No, I put a fake tattoo on my back and then hid it.”

Affleck has already addressed it on a few occasions. He notably called his tattoos “garish” in response to a New Yorker article about him, and in a 2019 Ellen appearance to promote Triple Frontier, Affleck said that the phoenix tattoo “represents something really important to me.” But for those who might’ve missed those confirmations, we now know once and for all that it exists. And, according to the New York Times, “it’s not nearly as garish in person.”