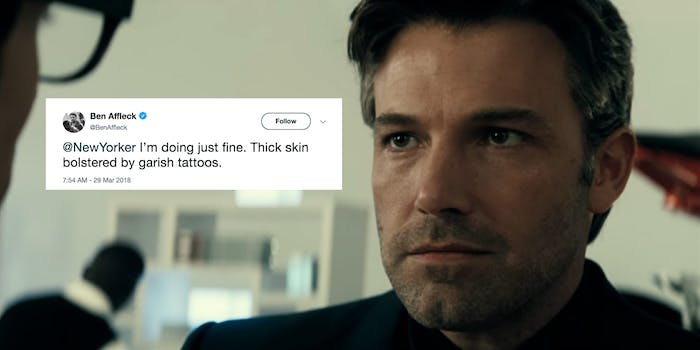 Ben Affleck breaks silence on his ‘garish’ back tattoo

The month of March has been dominated by thoughts and prayers over Ben Affleck‘s mysterious back tattoo. It became a meme. It became a talking point.

Over the weekend, the New Yorker published a piece titled “The Great Sadness of Ben Affleck,” complete with a photo of him staring at the ocean. It posited that the “image suggests not just the fall of Affleck but the coming fall of man.”

Today, the actor decided it was time to set the record straight.

Ben Affleck’s is the kind of middle-aged-white-male sadness that the Internet loves to mock—a mocking that depends on a rejection of this sadness, as well as a hedging identification with it. https://t.co/BuNJlj1gBc

People on Twitter seemed to enjoy Affleck’s response, and some responded with Batman memes.

Let’s take a look at that tattoo again, which is supposedly a phoenix rising from the ashes. Affleck did not comment on the choice of his tattoo, unfortunately.

The tweet marks the first time Affleck has publicly addressed the tattoo since it became a meme; he claimed in a 2016 interview that it was fake, but Henry Cavill’s face told another story. What a journey.