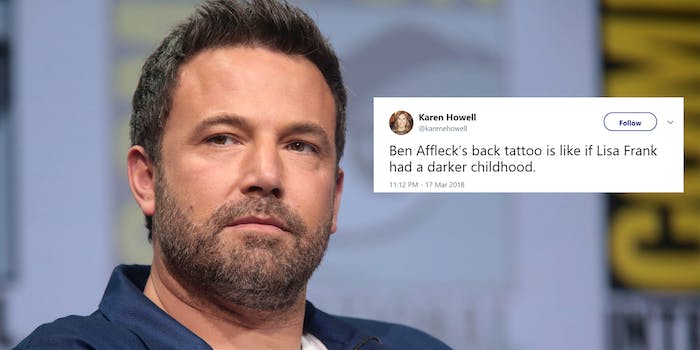 He once said it's fake—but it looks pretty real.

Ben Affleck, if you haven’t heard, has a very large, colorful back tattoo. It appears to show a phoenix rising from the ashes. And people on Twitter are mocking it with glee.

Ben Affleck’s back tattoo is like if Lisa Frank had a darker childhood. pic.twitter.com/JPCZeZUDlb

Ben Affleck’s back looks like the art on a very “hip” bottle of spiced rum. pic.twitter.com/kKoLVQ4bMM

Affleck’s tattoo first made a public appearance in a paparazzi photo at the end of 2015, and Vanity Fair reported that the photographer who shot it made around $32,000, as it was the first public image ever of the tattoo. Affleck then claimed the back tattoo was fake and made for a film role.

But recent photos of Affleck on a beach in Hawaii show that the actor’s tattoo is still there more than two years later. It seems pretty real.

Twitter was more than happy to call out Affleck on his previous comment about the tattoo being “fake.”

Next time you're feeling sad, remember that you're not Ben Affleck so you (probably) don't have a tattoo so big and so ugly and so universally ridiculed that you had to lie and say it was only temporary and just for a movie when it is so clearly not. (https://t.co/MQJfdA25tk) pic.twitter.com/sU72CUK4TG

Mostly, though, people tried to wrap their heads around the tattoo itself. It takes up Affleck’s entire back.

Sarah Jessica Parker liking this Instagram post about Ben Affleck’s awful back tattoo is the funniest thing I have seen in 2018. pic.twitter.com/OIFNnlZSfv

Don’t mock Ben Affleck’s phoenix tattoo. It symbolises how he has risen from the ashes, reborn as a guy with a tattoo that sucks

I’ve been following the Ben Affleck back tattoo drama more closely than the Mueller investigation.

Someone even incorporated Affleck’s back tattoo into another celeb meme, surmising that what Jennifer Garner realized at the Oscars could have been related to the phoenix body art.

Now it all makes sense.