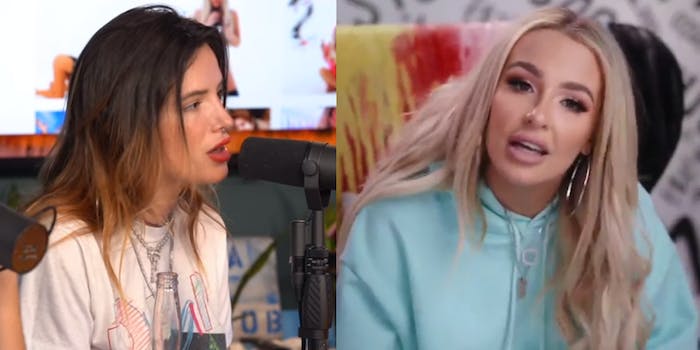 A new feud between Tana Mongeau and Bella Thorne may be brewing.

The most recent drama was sparked this week after Thorne was featured on Logan Paul’s ImPaulsive podcast. Thorne, who made a name for herself on the Disney channel as an actress and singer, was discussing her rise to Disney stardom. When the topic of Mongeau, who Thorne dated between September 2017 and February 2019, arose, Thorne delivered a brief but harsh barb to the Instagram personality.

At the 26:10 mark, Mongeau came up. The group had been discussing how access to phones often limits creativity, and Thorne added a final thought on the topic. “I think with Instagram they should really snap down—sorry Tana—on Facetune and Photoshop,” she said.

Mongeau, who was lounging on a nearby beanbag chair, appeared to take the comment in stride. She laughingly responded “fuck off” from her position near the set before the conversation resumed.

Thorne’s shade would not be considered by many to be unwarranted. Mongeau has come under fire for editing her photos before. Facetune, a photo-editing app used by many Instagram influencers, allows for images to be altered. Several instances of supposed editing by Mongeau have been called out in the past, including a recent occurrence in which photos taken by friends revealed how heavily altered her typical uploads appear to be.

Thorne’s gentle barb may have been due to the damage photo-editing does to our collective psyche, but Mongeau’s recent engagement to Jake Paul seems to have factored in. While many believe the engagement to be a ruse, an Instagram post from Thorne revealed her anguish at the news. “When your ex gets engaged,” the 21-year-old wrote alongside a red-eyed photo of herself in June.

Regardless of what the intent behind the shade was, it’s resulted in some serious side-eyes from fans.