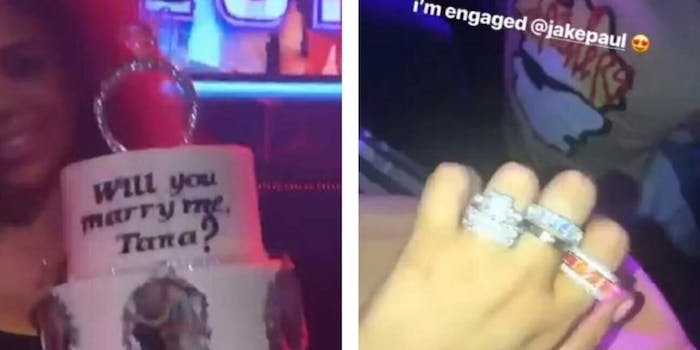 Did Jake Paul and Tana Mongeau just get engaged?

What an awfully quick courtship.

Less than two months after Jake Paul and Tana Mongeau announced that they were romantically involved—if you believe in that sort of thing from YouTube stars hungry for attention and pageviews—Mongeau revealed in an Instagram story on Sunday that she and Paul are now engaged.

Mongeau, Paul, and a host of friends celebrated her 21st birthday this weekend. Paul apparently bought her a Mercedes, and a caravan traveled from Los Angeles to Las Vegas for the birthday festivities. Her Instagram story was filled with drinking and the party’s response to their bus breaking down (they apparently hitched a ride with some random passersby).

Then, the YouTubers took their celebration to a club where employees held up signs wishing her a happy birthday. And then revealed a sign, apparently from Paul, that asked her to marry him.

Is that at all believable? After all, Paul has been known to prank his 19.2 million YouTube subscribers—a month ago, Paul, in a thumbnail for one of his vlogs, teased that Mongeau was pregnant. Plus, in his past two public relationships—one with Alissa Violet and one with Erika Costell—there were certain aspects of them that were faked for YouTube purposes.

In this case, it’s even easier to be suspicious, because Mongeau is filming an MTV reality show called No Filter: Tana Turns 21.

So, is this all an act? Mongeau says no.

But with Paul and Mongeau—and with most other influential YouTube stars—it’s nearly impossible to tell what’s true and what’s not. Mongeau and Paul have been through plenty of controversies. Paul was the subject of an eight-part documentary by Shane Dawson to determine whether he’s a sociopath, and Violet accused him of emotionally abusing her during their so-called relationship

Meanwhile, Mongeau’s video convention, TanaCon, was an unmitigated disaster last summer, and last October, she found more controversy after some accused her of wearing a Halloween costume that sexualized then-15-year-old JoJo Siwa.

But it seems like Paul and Mongeau are good for each other. At least when it comes to YouTube success. According to Social Blade, Paul’s monthly subscription numbers had fallen drastically between September 2018 and April 2019. But in May, the same month he and Mongeau “revealed” their “relationship,” that number jumped to its highest level in eight months.

Mongeau, meanwhile, has gained about 450,000 subscribers since the beginning of May to bring her total to more than 4.5 million, and her average daily video views have skyrocketed as well.

Even if this relationship and this engagement are fake—there’s a great chance of both scenarios, by the way—the online success for both of them in the aftermath seems to be quite real.