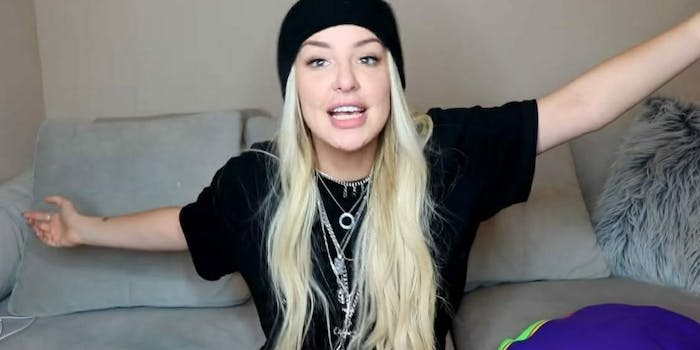 Tana Mongeau is going to VidCon a year after TanaCon disaster

Last year, she went up against VidCon—and lost badly.

A year after her TanaCon video conference ended in chaos, the conference YouTuber Tana Mongeau was competing against has invited her to be a featured star.

VidCon announced Monday morning that Mongeau would be attending this summer’s conference as a “featured creator” for the first time. In the press release announcing the news, VidCon said, “The decision was made by VidCon after the two parties met with the same goal—to provide the best experience for all involved including VidCon, Tana, and most importantly, the fans.”

It’s a stark contrast from 2018. Mongeau created her own festival, called TanaCon, to compete directly with VidCon at the same time in the same city. An estimated 20,000 fans descended on Mongeau’s creation, causing mass disorder without enough fan security. People waited in line in the blistering sun for hours, and though Mongeau tried to move the event to a larger venue at the last second, the fire marshall eventually shut down the convention. It was an unorganized mess, and it cost Mongeau plenty of goodwill (and lots of mocking memes).

But apparently, all has been forgiven by VidCon.

“We are thrilled to welcome Tana back to VidCon this summer and offer her a platform to engage with fans and celebrate her recent successes,” Jim Louderback, VidCon’s general manager, said in a statement. “VidCon’s mission is to bring members of the online video community together. We are committed to making sure that both the creators and their fans have the best experience possible.”

Mongeau said, “VidCon knew how important it was for me to attend as a featured creator, and I am so glad that this year we were able to work together to make something happen. My No. 1 priority has always been my fans, and as a featured creator, I’m excited to have the opportunity to meet with them on-site, thank them for all their support, and discuss my many new projects, including my new reality show [MTV No Filter: Tana Turns 21], and doing it in a safe and comfortable environment—both for them and myself.”

Lately, Mongeau has been in the news for her apparent romantic relationship with Jake Paul and for her upcoming reality show.