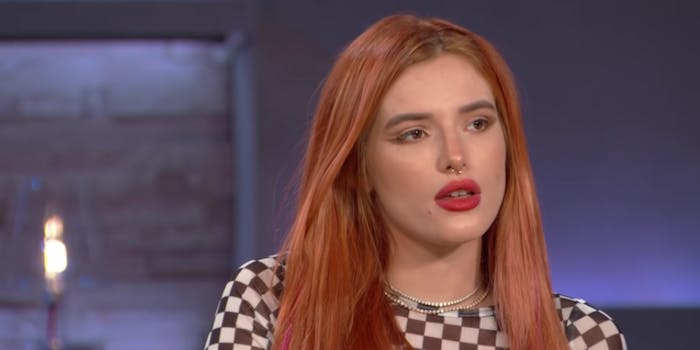 Is it victim blaming or a common sense reminder?

Whoopi Goldberg shared her opinion regarding Bella Thorne’s nudes during The View on Wednesday. Now people are conflicted over whether Goldberg was victim blaming or giving a common sense reminder.

Thorne said she was blackmailed with her own nudes, so she decided to take her “power back” by releasing them herself. Goldberg criticized Thorne for taking the photos in the first place, saying she should have known the pictures could be hacked–especially since she is a celebrity.

“Once you take that picture it goes into the cloud and it’s available to any hacker who wants them,” Goldberg said. “And if you don’t know that in 2019 that this is an issue, I’m sorry, your age does not—you don’t get to do that.”

BELLA THORNE POSTS NUDE PICS TO THWART HACKER: Actress Bella Thorne said she took her “power back” by sharing nude photos of herself after blackmailers threatened to leak them – the co-hosts discuss if this was the right move. https://t.co/1091s9Fn2d pic.twitter.com/VqFXmggPle

Thorne posted the nude photos of herself on Twitter, Saturday.

“I feel gross, I feel watched, I feel someone has taken something from me that I only wanted one special person to see,” Thorne wrote in the tweet.

Sunny Hostin, a co-host on The View, felt sympathy for Thorne.

“For someone to extort her and threaten her with posting these pictures, it’s terrible,” Hostin said. “She’s not to blame. It’s the guy that’s trying to extort her.”

Thorne responded to Goldberg in a series of emotional Instagram stories.

The view is trash

In an Instagram story, Thorne said that she was canceling her upcoming appearance on The View due to the effect the hosts’ thoughts could have on young girls.

“Saying if you take a sexy photo then it basically deserves to get leaked, like, don’t be surprised at all and don’t feel sorry for yourself,” Thorne said. “So, if I go out to a party drinking and I wanna dance on the dance floor, do I deserve to be raped too? Because to me, I see those two things as really fucking similar.”

Twitter users slammed both Goldberg and The View–and did not hold back.

“What Whoopi Goldberg said about Bella Thorne is victim blaming,” one Twitter user wrote. “Please don’t do that shit, Whoopi.”

What @WhoopiGoldberg said about @bellathorne is victim blaming. Please don't do that shit, Whoopi. https://t.co/fNNYCU5zgt#hacking #victimblaming

So apparently if you become famous, your human rights are voided. Because she is famous, she should expect people to violate her rights and just accept it? @WhoopiGoldberg this isnt right. Her right to privacy doesnt end because she sent pictures to her boyfriend. https://t.co/3D453i0rR9

Is woke Hollywood going to tolerate this? https://t.co/iFSkmFvgOc

I really hope @bellathorne is reading this thread to see how justified she is by calling out our culture for attacking victims, instead of perpretators. You have every right to feel shamed by @TheView. #isupportyou

Yet, other Twitter users sided with Goldberg and her sentiments.

To those of you telling me that I am victim blaming, reread what I said.

In REALITY when you store stuff on pubic servers you leave yourself open to hacker infiltration, ESPECIALLY if you're a celebrity. This isn't about blaming, it's about protecting yourself. pic.twitter.com/48PA59lbc1

*Panics when Whoopi is trending*
*Sees Why*
Me to Whoopi's comments: pic.twitter.com/8pQ7LC03eC

Bella Thorne didn’t rant publicly toward the person who leaked her nudes.

Everyone has a right to privacy. But in this day and age, anyone in the public has to know people are constantly trying to hack them. Whoopi’s point has less to do with shaming Bella Throne and more to being smart about protecting yourself. pic.twitter.com/0w5hvqp2du

When you see that people are somehow mad at Whoopi for a perfectly logical point of view: pic.twitter.com/HZqzMgWkiX

Others just took this opportunity to hate on Meghan McCain.