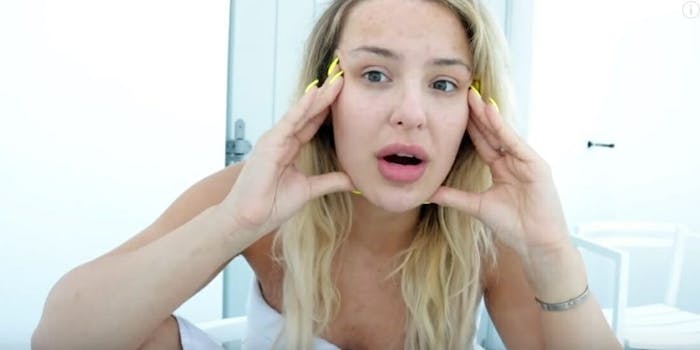 YouTuber Tana Mongeau is facing a huge backlash after she dressed as a “sexy” version of young social media star JoJo Siwa for Halloween. The problem? Siwa is only 15 years old. Now, Mongeau is saying she didn’t mean to sexualize Siwa and said that Siwa actually encouraged the costume.

Not everybody, though, is buying Mongeau’s explanation.

Siwa has 8 million YouTube subscribers and is best known for her appearances on the Lifetime show Dance Moms and for vlogging about her everyday life—mostly teenager-type content like giving tours of her “epic” new bedroom and showing how she creates side ponytails. She’s also very much underage. That wasn’t lost on some of the people who saw Mongeau’s tweet that generated 5,000 retweets and 63,000 likes.

Not only did Mongeau dress like Siwa, but with a bare backside in a thong, she also labeled it “hoe hoe” and tagged her in the tweet.

Seriously what is wrong with you oh my god

Can’t wait for the apology video for tagging a CHILD in a half naked picture of herself lol.

In response, Mongeau tweeted that she “saw some tweets about my Jojo costume and I just wanna clarify before things get crazy—Jojo is a great friend of mine & I would never intend to sexualize HER, I literally think that anything like that is gross as fuck. It was just like a slutty schoolgirl costume, girl scout, or cheerleader to me. I totally didn’t see it that way and would never want to! I LOVE Jojo and making crazy halloween costumes and she was telling me to do it! just wanted to let u know my standpoint on that before I see anything else.”

You trying to justify it by saying “she told me to” is legit grosser than the costume, that doesn’t make it ok. After how many problematic moments how have you still not learned not to self victimize and shift blame????? You need some actual therapy girlie

Mongeau has seen plenty of controversy in the past few years. In 2017, she was the focus of an iDubbbz video in which she was seen saying the N-word on multiple occasions on social media. At the time, she tweeted, “I have made a lot of mistakes, and the right thing to do is own up to them, and move on … I’ve made so many mistakes and even at 18, I’m still trying to learn. I intend on owning up to everything, and hoping you’ll forgive me.”

In June, her newly created festival TanaCon was overrun with problems and overcrowding, and it eventually had to be canceled. Afterward, she tweeted, “Being 19, and planning a convention is the hardest thing I’ve ever done and being the face of every problem is hard and I’m sorry. So sorry. I wish we would’ve had two arenas and 10,000 more security. I’m fucking dumb obviously but at the end of the day my number one priority is your happiness.”

Her judgment is still being questioned. Meanwhile, another controversial star also dressed up like Siwa for Halloween. Fortunately for Jake Paul, his costume was a little more appropriate.