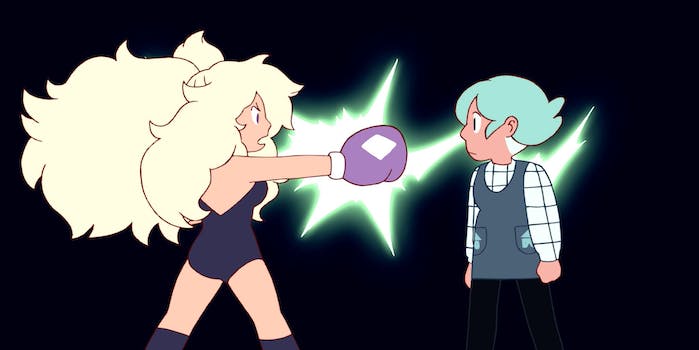 Photo via Bee and Puppycat

The pioneering project returns—with higher stakes than ever.

But do you know who Bee and the infamous Puppycat even are?

If you answered no, wish I was you, because then I’d be able to watch the series for the first time all over again. Created and written by animator Natasha Allegri, this series follows the cheeky space adventures of Bee, an unemployed 20-something, and her dark-souled, yet irresistibly adorable friend Puppycat.

Upon its 2013 debut, the first two shorts gained over five million views and spurred Allegri to open a Kickstarter to fund an entire series. The Kickstarter raised over $900,000 which at the time was the most successful animation Kickstarter on the platform’s history. Then in late 2014, Cartoon Hangover debuted the four new episodes which were named by Los Angeles Times critic Robert Lloyd as one of the best shows of 2014.

When we last left Bee, she’d just missed the newest episode of her favorite TV show, Pretty Patrick, after being abducted by giant space cats intent on making her their pet. Now, two years later, the show is picking up right where it left off and promising fans a fighting match, wedding, and an ill-timed temp job in a place called Baking Planet.

This animated series is notable for reasons far beyond Bee’s incredibly awkward interactions and Puppycat’s dark humor. For one, the show gives a relatable and realistic portrayal of a female leading lady. It is one of the first animated webseries to be produced for and by a woman— helping to set the table for notable creators like Leigh Lahav, Fran Meneses, and Doctor Puppet.

It was also one of the first times where television networks saw and understood YouTube’s power in connecting fans directly with animated series. Bee and Puppycat is a pioneer in the post-YouTube world of animation series along with Don’t Hug Me I’m Scared (also crowdfunded), Simon’s Cat, Cyriak, Salad Fingers, Film Cow, and Weebl.

While Bee and Puppycat isn’t the first series to leave YouTube, it will be interesting to follow fans’ responses to the sudden platform change. This was a debate PJ Liguori faced upon deciding to release his long-awaited series Oscar’s Hotel on Vimeo. As I wrote last year: The pressure to make Hollywood-level content on a YouTube budget is taking its toll.

That question continues to plague creators such as Olan Rogers—whose series Final Space has been picked up by TBS—as well as musician Dodie Clark as they continue to gain acclaim beyond the web.

But as the digital media space evolves, creations such as Bee and Puppycat will continue to endure and change the way fans enjoy and engage with their favorite genres of videos. It’s too good a series not to.