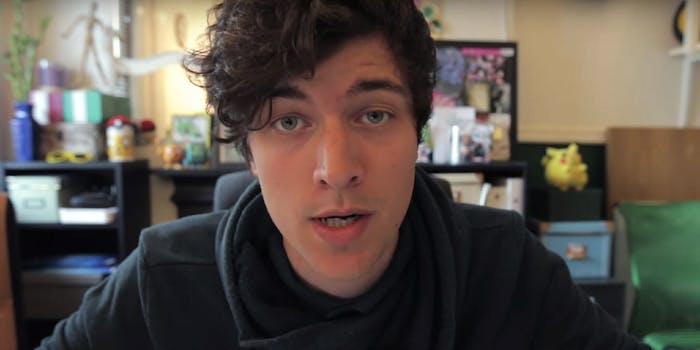 As the spotlight shines brighter and brighter on YouTube’s rising stars, the pressure to make Hollywood-level content on a YouTube budget has begun to take its toll the creator community. So what is the future of filmmaking on YouTube? And can fans and creators amicably coexist when paid content is on the line?

Oscar’s Hotel follows the fantastical adventures of Oliver, played by YouTuber Chris Kendall, who must manage, and in the end save, the magical creatures of his uncle Oscar’s hotel. The cameo list is what diehard YouTube fans would call “the ultimate dream,” bringing such creators as Olan Rogers, Grace Helbig, Hannah Hart, Jack Howard, Dean Dobbs, Jake Roper, Mamrie Hart, Mitchell Davis, Joe Bereta, and Sir Patrick Stewart into the same space. Liguori also teamed up with Jim Henson Studios to bring alive the costumes and characters of his imagination, adding a whole new element of product to the series.

Along with vlogs from Chris Kendall and behind-the-scenes features hosted by Mitchell Davis, Liguori releasing exclusive videos to his own YouTube channel as a way of keeping his 760,000-plus subscribers involved in the filmmaking process. In the past couple months, he has taken us on tours of the set, created DIY projects, revealed Jim Henson Studio exclusives, and even invited the masses to the show’s digital launch party. But upon learning Oscar’s Hotel was only available for a $10 download fee, fans began ripping the series from Vimeo onto YouTube in order to make it accessible to everyone.

For many fans, their financial or geographical situations have left them excluded from enjoying the series; they grappled with the idea of illegally downloading when there was no other option available. Under Liguori’s video “Please Don’t Kill My Show,” fans shared:

Some fans even went so far as to offer to pay for others:

For his part, Liguori has since publicly addressed the issue with his viewers, explaining both why his series cost money and the effects their copyright infringement has on the future of YouTube filmmakers.

“The really ironic thing is, if I was to make [this series] free, everything that you’d want [cameos, Jim Henson, high-quality production] from Oscar’s Hotel wouldn’t exist,” Liguori candidly shares in his video. “It wouldn’t exist because it would have had to have been sponsored by a brand… Making it paid-for content gives us the freedom to do something amazing.”

By illegally downloading, Liguori explains: “You’re going to kill my show. You’re going to kill the future of this genre of content. … However, if you do support the show by not illegally uploading it, you’re going to see a positive change in the world of entertainment.” Liguori isn’t the first YouTube creator to chose paid content over YouTube; he follows in the footsteps of the Riedell Brothers (Camp Takota on Vimeo and Netflix) and Wong Fu Productions (Everything Before Us on Vimeo).

The introduction of paid content is a double-edged sword.

The introduction of paid content is a double-edged sword. From the creators’ perspective, paid content opens up countless avenues for them to create the best possible content for their loyal audiences. A win for everyone right? But for the fans, paid content can feel like a slap in the face if they’re unable to enjoy the content their years of support have made possible. So can this problem be solved moving forward?

It’s a tough question without a simple answer. While the solution might not be paid content due to its exclusive tendencies, neither is it illegally downloading shows from one platform to another. As fans, especially if we’ve followed a creator for years, we tend to forget these YouTubers are no longer just awkward teenagers talking to a webcam about their dreams, but now actual adults working to make those dreams a reality. But if last year’s critical YouTube culture debate holds any clues, the solution may lie in redefining the expectations and relationships between creators and their audience.

Clarification 7:12am CT, Oct. 14: This version of the article has been adjusted to clarify the roles of New Form Digital and Vimeo in the production and distribution, respectively, of Oscar’s Hotel.