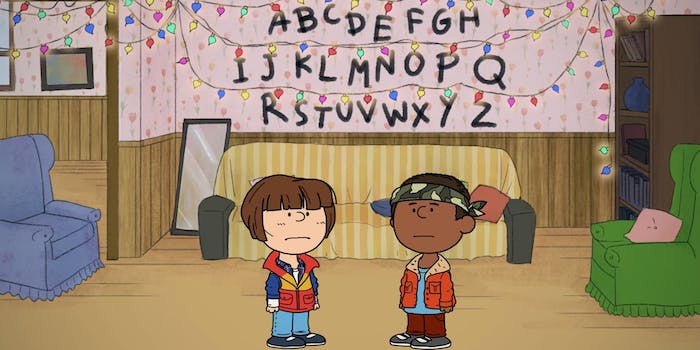 For animator Only Leigh, ‘A Stranger Things Christmas’ barely scratches the surface

Checking in with one of YouTube's leading animators.

Lahav is the face behind one of YouTube’s biggest animation channels, Only Leigh. She’s made a name for herself as an animator unafraid to collide the universes of pop culture’s biggest obsessions. Thor meets Arrested Development, or Frozen finds itself inside the fences of Orange Is the New Black—as a creator Lahav’s goal is to make and break tension.

“Why I love fan creations so so much is because you bring something personal about yourself to this existing piece,” Lahav tells the Daily Dot. “When I make a parody, we take a certain tension between characters and their worlds and break it. We take Game of Thrones and put it in Arrested Development because that was intense: Let’s resolve the tension with humor.”

Raised in Israel, Lahav first realized her interests were a different when she was on the cusp of teenagehood.

“I was 12 that I realized I was a little more obsessed with pop culture and geekiness than most of my friends,” Lahav says. “As I grew older it felt harsher. My friends were into teenage stuff like boys and parties, I was into anime. Same with animation. I continued watching animation with the same enthusiasm as when I was younger.”

Lahav had always been interested in the arts, with a focus on violin, but it wasn’t until seeing the university curriculum for animation that she decided to pursue it full-time. While it’s clearly her deep love, Lahav admits that animation as an occupation is a challenge.

“With animation, you need to decide when the work is done because you can always improve yourself,” Lahav says. With music, Lahav was used to producing an immediate project, while with animation, one video could take months to complete. “Your heartbreak is greater with animation. When you need to cut out something for creative reasons there’s a real sense of loss. It was hours and hours of work.”

While in college, Lahav used YouTube as a way to casually share videos and projects with friends. Then in 2013, she began uploading content on a regular basis and from her first video, “TV Bday Palooza,” a birthday homage to her husband and co-writer Oren. She gained press in Gawker, Babble, and Viral Viral Video. Within a year, her parodies such as “Fangirls” and “Thorested Development” gained over a million views each and helped her gain over 350,000 subscribers in just four months.

“When I started out, I didn’t know how big YouTube was, but I wanted something accessible. From what I knew of Vimeo, it was considered the high-class stuff and that wasn’t so much for me,” Lahav admits. “YouTube for animation isn’t easy, we’re not vloggers, gameplay, or beauty stuff. For animation it’s a little more complicated because it takes longer to make and it’s a little more difficult to sell.”

While YouTube animation has yet to reach the popularity levels of vlogging or tutorials, the once-niche community is continuing to emerge into the mainstream with popular creators such as Simon’s Cat, Domics, PES, Don’t Hug Me I’m Scared, Cyriak, Doctor Puppet, Glove and Boots, and Swoozie. Lahav acknowledges that part of her channel’s popularity is that she’s riffing on something familiar to broad audiences.

“[This coverage] is awesome and overwhelming because I always have the feeling I made something fun and accessible,” Lahav says. “Seeing ‘Frozen is the New Black’ on Time magazine was like making a relative who is always serious laugh.”

But it’s Lahav’s pioneering ability to realistically, comically, and respectfully portray female fangirls on YouTube that has set her apart as a creator.

As both a YouTube creator and a fangirl herself, Lahav knows firsthand the gender biases and double standards affecting both of these communities. “When I first started being published I was asked, ‘Is there a difference between fanboys and fangirls?’ And I said essentially no. You have the stereotypical fangirl screaming and running after the cute boy characters. Even though there’s absolutely nothing wrong with doing that, presenting that idea as the only trait to the point of a stereotype is limited and inaccurate,” Lahav says. “There are a lot of representations [of fanboys] but there wasn’t much geek girl representation and I wanted to bring that over.”

Ask her what she’s a fangirl of and Lahav brightens like the traveling Tardis in Doctor Who.

Over the past year, Lahav has begun experimenting, too. She recently released her debut short film Earworm that blends live action and animation for the first time on her channel. In collaboration with New Form Digital, she also released the pilot of her animated series Belle & Tina are Time Travelers. While continuing to upload onto YouTube, Lahav says she’s focusing more on developing shows for other platforms—and fighting the good fight as a female animator.

“When you’re a female creator, you will run into a lot of challenges like not being taken seriously, people not listening to you,” she says. “Don’t let this bring you down. It’s not that you’re not good, there are just other forces at work. Remember this and go forward anyway.”

In love with Only Leigh and want to further support her work? Visit her Patreon and be the first to see what she’s cooking up next.