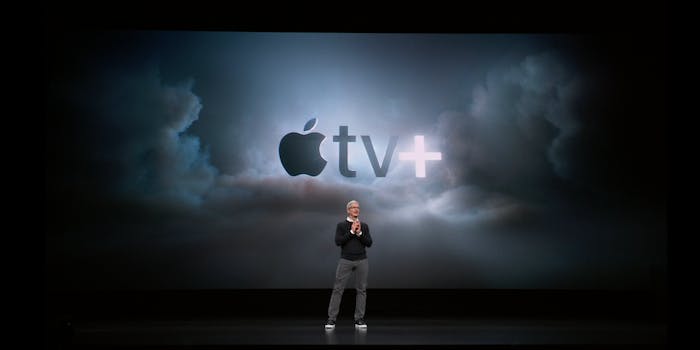 People were really excited about Oprah.

In her new partnership with Apple and the officially announced Apple TV+, it sounds like Oprah Winfrey is going to be awfully busy.

In Apple’s announcement of its new streaming service on Monday, amid a glut of celebrities who were on hand at the mega-company’s headquarters in California to announce and promote their new shows, Oprah was the last to emerge on the stage. After an extended round of applause, she announced she’s creating two documentaries for the platform—and the world’s largest book club.

“We all crave connection,” Oprah said. “We search for common ground. We want to be heard, but we also need to listen, to be open, and to contribute to harness our hopes and dreams and deal with our divisions.”

She plans to do that with a pair of documentaries. The first has a working title of Toxic Labor that will explore the toll of sexual harassment and assault in the workplace. The second is untitled, but it will be a multi-part series that focuses on mental health. As Oprah described it, the series will investigate the scourge of depression, post-traumatic stress, addiction, and other mental health issues across the world.

Oprah also plans to stream conversations and interviews with authors that can be heard throughout the globe. It’s basically her famed book club for the streaming service era.

Oprah, though, wasn’t the only familiar face to grace Apple’s stage on Monday. Here’s a list of celebrities that appeared and what they’re contributing to Apple’s streaming service that is coming sometime this fall (and does not yet have a price tag).

The collaboration between Jennifer Aniston and Reese Witherspoon has been receiving plenty of attention, and on Monday, they welcomed Steve Carell to the stage, as well. It’s a show about the behind-the-scenes happenings at a morning show and explores the interactions between the males and the females who create that fictional show in this complicated cultural moment. “We can’t wait to show all of you what we have been cooking up,” Aniston said. According to the New York Times, the show has nearly finished shooting the first season.

When Steven Spielberg’s dad was growing up, he loved a science fiction magazine called Amazing Stories. When Spielberg was a little kid, his dad read him stories from those same magazines. Now, Spielberg is the force behind the TV version that will be featured on Apple TV+. “That amazement is a human birthright,” Spielberg said Monday. “It’s an inheritance.” As for what he wants the show to be, he said, “We want to transport the audience with every episode.”

The show that features Jason Momoa and Alfre Woodard takes place in a world that has been devastated by a virus that has left the Earth’s few survivors completely blind. Fast-forward a few hundred years, and there are disputes about whether anybody ever had the ability to see the world around them. On Monday, Woodard said See is a show where “we may discover something entirely new about ourselves.”

As introduced by Kumail Nanjiani, Little America is an anthology series that will focus on immigrants in America. Created by Nanjiani and Emily V. Gordon, Mac World writes that the show’s episodes will be based on true stories that were printed in Epic magazine. But Nanjiani said they weren’t simply stories about immigrants. Instead, they’re stories about humans.

JJ Abrams and Sara Bareilles have combined to create a romantic drama series that touches on the struggles of being a singer/songwriter and about a woman who has to find her voice through music.

In case you wondered whether children’s content would be included in Apple TV+, Big Bird appeared Monday to assure you that kids had not been forgotten. Big Bird introduced a new Sesame Workshop character named Cody that will star in a pre-school show called Helpsters that will show children how to solve problems by using coding.

There are likely many more shows to be announced for the new streaming service, but Apple executive Zack Van Amburg wanted to make sure he explained how Apple TV+ would be different than other streaming platforms.

“It’s not just another streaming service,” he said. “It’s the destination where the world’s storytellers will bring their best ideas to life.”