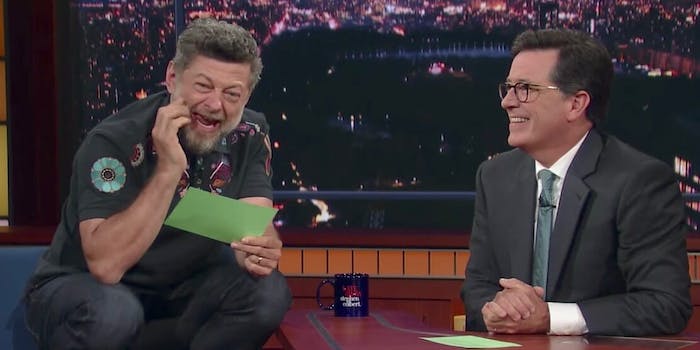 Andy Serkis reads Trump tweets as Gollum—and it is tremendous

We’ve already seen our fair share of iconic pop culture characters such as Mark Hamill’s Joker and Futurama’s Zapp Brannigan take on some of Donald Trump’s tweets, but now one of cinema’s most tragic villains has finally put his spin on it.

Andy Serkis chatted with Stephen Colbert about War for the Planet of the Apes, with Colbert praising Serkis for his performance, especially after seeing just how much of it wasn’t visual effects. But Colbert, who’s a massive Lord of the Rings fan, couldn’t help but combine his love with The Late Show’s biggest subject and asked Serkis to read Trump’s tweets as Gollum and/or Smeagol—his pick. Serkis was completely game.

Crouching on his chair (starting at around the 3:40 mark), Serkis dove right into a Trump tirade about the fake media and conveyed a multitude of emotions while Colbert grinned beside him. It’s just as incredible as you imagine, in no small part because Gollum knows something about false narratives playing out in media: Bagginses didn’t find the One Ring, he stole it—his Precious—from Smeagol.

And no, Gollum doesn’t know what covfefe is, either. Sorry.