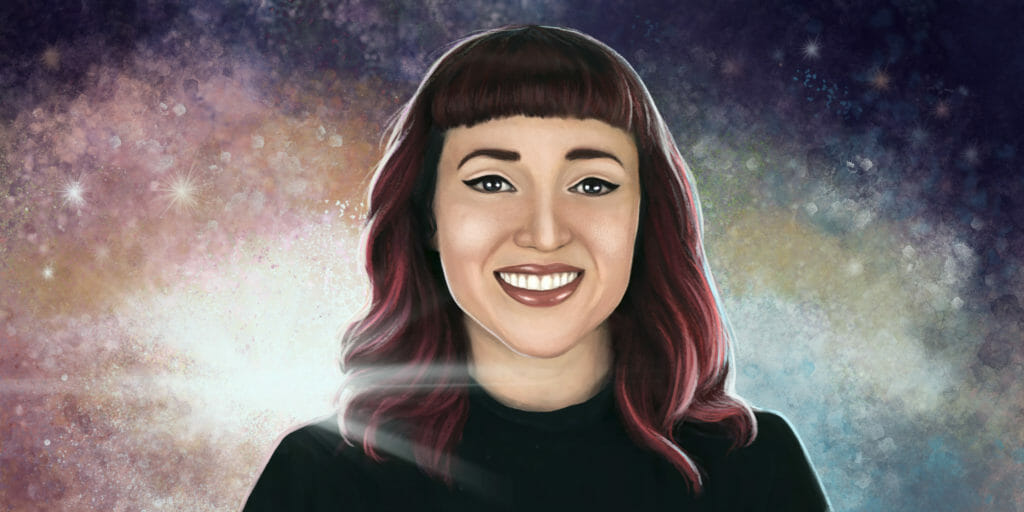 Space historian and #WCW Amy Shira Teitel is fighting for women in S.T.E.M.

The expert and author is using YouTube to educate the world. And the pink-haired, tattooed cat lover is doing it her way.

Like all great love stories, Amy Shira Teitel’s longtime affair with space history has been a winding and unpredictable road. She has turned this lifelong pursuit into a full-time business that has launched her as a writer and expert. Now the author, blogger, vlogger, and TV host is using her digital media presence to champion women in science, technology, engineering, and mathematics (S.T.E.M.)—making the often-academic topic of space accessible to anyone who is interested.

As a 7-year-old, Teitel presented a poster to her second-grade class on the many ways Venus was the opposite of Earth. But despite being obsessed with space and science throughout her education in Canada, Teitel soon realized that it was the history of science that intrigued her the most. After picking up a master’s degree in science technology studies, a program that wasn’t the right fit, Teitel moved to Phoenix. Not yet ready to pursue a Ph.D. but at a loss on how to pursue academia any other way, Teitel spent her days blogging on Vintage Space and nights working as a personal trainer. Four months into her blogging career, started in 2010, her Vintage Space articles began to gain traction across publications like Nerdist and the Guardian; Al Jazeera began asking her to write regular, original content.

With her niche blog gaining steam, Teitel decided to put a Ph.D. on the back burner to see what other unexpected opportunities might present themselves. In 2012, she first opened her YouTube channel as a space to make teasers for her blog posts, which were filing at a vast 2,500 words. The channel eventually transformed into a full-time education hub with videos covering everything about space exploration from the 1960s onward. Her videos quickly gained notice not only for their original content, but for the fact that she—a pink-haired cat lover with tattoos—was inspiring other women in the overly male dominated field of education on YouTube. It was her YouTube videos that sparked DNews to hire her as a regular host, and spurred her TV appearances on Science Channel, American Heroes Channel, SyFy, and the Travel Channel.

Like a skilled acrobat spinning plates without missing a step, Teitel added author to her business card in 2015 after publishing her debut book, Breaking the Chains of Gravity. After my deep research and years of watching her channel, I can confidently say that everything she puts her mind to will work out strongly. Her years of building a brand around her passion continue to show others that it is possible for them to do the same. So as young girls continue to push back against the boys’ club of S.T.E.M., Teitel stands as a heroine using her videos to shatter taboos around who and how someone can succeed in science.