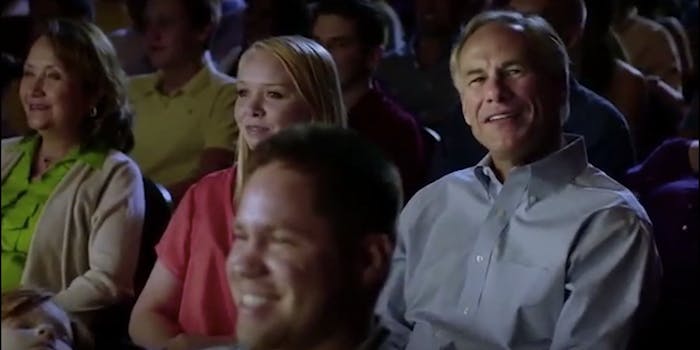 The Alamo Drafthouse has some strong words for Greg Abbott

At least he's not running for president of the Magnited States of America.

Texas politics are always a bit dramatic, but the gubernatorial race in Texas has already found its way to the big screen, courtesy of the Alamo Drafthouse Cinema.

Republican candidate Greg Abbott recently put out an ad with him in a movie theater appealing to Texas voters. The guys over at Alamo Drafthouse were not amused.

Those of you not fortunate enough to live near an Alamo Drafthouse may be unaware of its strict movie-viewing rules, which include a zero-tolerance policy for talking or texting during a movie. The theater chain is so strict with said rules that it’s more than willing to kick you out without a refund. In 2011, a texting woman apparently learned this lesson the hard way, and her irate voicemail went viral.

The ad is a light jab at Abbott, but it’s really just a funny way to promote the Drafthouse’s new #DontTalk campaign.

It’s not the first time the cinema chain has taken a stance against a big name, either: After a texting debacle during last fall’s New York Film Festival screening of 12 Years a Slave, Alamo CEO Tim League tweeted that the Material Girl would be unwelcome at his theaters.