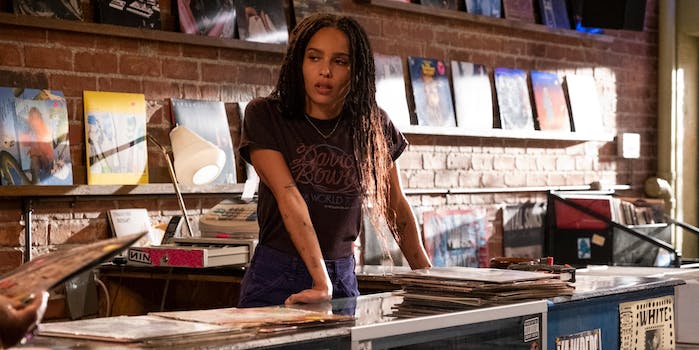 The series was canceled after only one season.

Hulu canceled the critically acclaimed series High Fidelity, a reimagining of the Nick Hornby novel (and the 2000 movie) that starred Zoë Kravitz as a record store owner in a gentrifying Brooklyn, last week after only one season. And while Kravitz mourned the series on social media, she was also critical of Hulu’s decision to cancel a series led by a woman of color.

In her post addressing the cancellation on Instagram, Kravitz noted that “#breaksupssuck” and thanked everyone who watched the series.

“i wanna give a shout out to my #highfidelity family. thank you for all the love and heart you put into this show,” Kravitz wrote on Instagram. “i’m in awe of all of you. and thank you to everyone who watched, loved and supported us.”

Although television had been trending toward shorter series in general—in terms of both shows planned that way and shows canceled too early—many were shocked by the cancellation of High Fidelity, which had both positive reviews and vocal fans. Several fans of the show included Reese Witherspoon, Halle Berry, and Questlove, who all voiced their dismay that the show was canceled.

Tessa Thompson was also among those who commented on Kravitz’s post, noting that she would “miss you alllllllllllll so much.”

“It’s cool,” Kravitz replied. “at least hulu has a ton of other shows starring women of color we can watch. oh wait.”

While High Fidelity is done for the time being, it was a show that co-creators Veronica West and Sarah Kucserka had envisioned going on for several seasons.

“Hopefully there are more seasons of High Fidelity — I think our intention was that people would be rooting for different relationships and as season one progresses, we do get to spend more time with Cherise and get inside her head a little bit more, and we do have an episode that was totally from Simon’s point of view,” West told the Hollywood Reporter in February. “As we move forward into future seasons, I think Rob is going to date some strangers that we haven’t met before. I think we’re going to go on relationship stories and other kinds of stories with Cherise and Simon and the universe will continue to expand.”