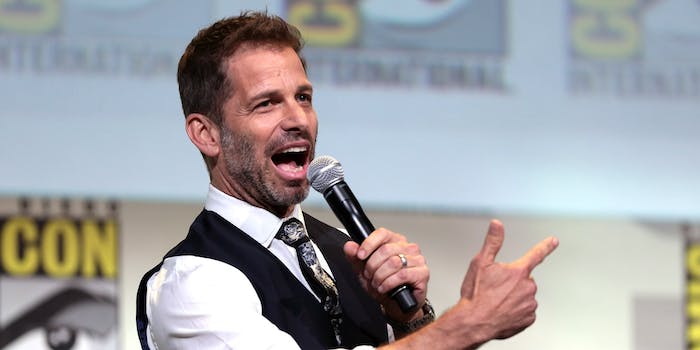 The director tweeted an image of Batman and Catwoman having sex.

Zack Snyder sure does know how to grab people’s attention. Last week, in the midst of a ridiculous public debate about whether Batman should be allowed to have oral sex, he made his opinion clear. How? By tweeting a picture of Batman going down on Catwoman, captioned with the word “canon.”

This was a pretty funny response to the whole mini-scandal, not least because DC Comics executives apparently don’t approve. DC forbade a similar scene from appearing in the adult animated show Harley Quinn. But there was another question hanging over Snyder’s Batman art: Where did it come from?

No one recognized the art from any Batman comics (unsurprisingly, because it was NSFW), and a reverse image search turned up no results. This suggested that Snyder was the first person to post it online, so it wasn’t a piece of pre-existing fanart from elsewhere. Did he draw it himself, or did he literally commission a piece of erotic Batman/Catwoman fanart for a one-off joke? Both options are plausible because Snyder went to art school and could theoretically have drawn the picture. One week later though, the plot thickened. The original image has now been taken down by a copyright notice:

DC Comics is the most obvious culprit here, but we don’t actually know who issued the takedown notice. If it was DC, then that’s a pretty shady move toward one of the DC franchise’s most beloved directors. It’s also pretty unusual to see in regards to fanart.

Copyright takedowns are not an exact science, with YouTubers frequently complaining of being punished by unfair copyright claims. And in the world of multimedia franchises like Batman, fanart (including NSFW content) is allowed to run free and wild on social media. Similarly, people are allowed to post screencaps from comics online. So why, exactly, has Zack Snyder’s Batman/Catwoman art been removed from Twitter?

The Daily Dot has reached out to DC Comics.