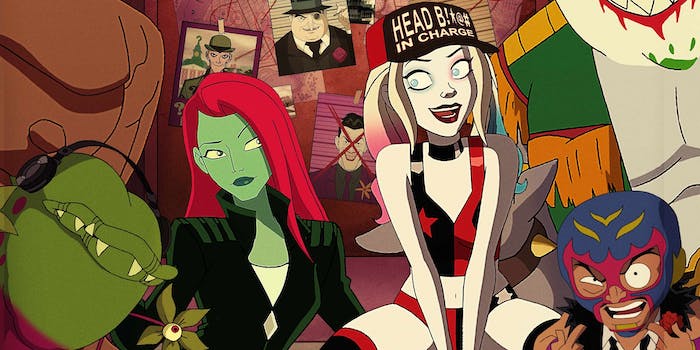 Batman is embroiled in an oral sex controversy

Should Batman go down on his girlfriend? DC Comics bosses say no.

Forget the age-old debate over whether Batman should kill his enemies. DC Comics has managed to find a far more ridiculous dilemma: Should Batman have oral sex? Specifically, should he be the giver? According to the executives overseeing Batman’s public image, the answer is a resounding no.

This revelation emerged via the TV show Harley Quinn, an animated adult comedy with an irreverent attitude to DC icons like Batman and Superman. Speaking to Variety‘s Joe Otterson, the show’s co-creator Justin Halpern explained that they wanted to include a scene “where Batman was going down on Catwoman.” However, DC put the kibosh on this idea because “heroes don’t do that.”

“Are you saying heroes are just selfish lovers?” the Harley Quinn showrunners asked. In response, their DC bosses pointed out that characters like Batman need to be as marketable as possible. “It’s hard to sell a toy if Batman is also going down on someone,” they explained. Naturally, this revelation led to a flood of mockery on Twitter:

While it’s just a throwaway anecdote from behind the scenes of Harley Quinn—a show that otherwise has a lot of creative freedom—this does actually tie into some widely-criticized trends in American pop culture. When it comes to things like MPAA ratings and TV networks deciding what’s suitable for “family” shows, violence is much, much more acceptable than sex. There’s also a double standard around what kind of sexual content gets shown in mainstream TV and movies. We’re far more likely to see naked women than naked men (as evidenced by Game of Thrones), and we’re more likely to see women get sexually assaulted than receive oral sex.

This Batman controversy is built around the idea that Bruce Wayne is somehow emasculated by going down on his girlfriend. It makes him less marketable as a superhero. Meanwhile, it’s totally fine for him to be extremely violent in other DC media, including movies with a family-friendly rating like Batman v Superman.