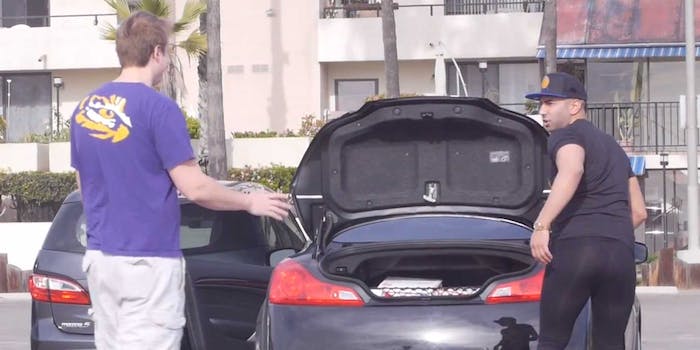 Don't fake the hump on a nasty rump.

This isn’t the most scientific experiment in the field of sex and gender identity, but it does reveal quite a lot about the nature of human desire. Most of all, though, it demonstrates that leaning over in skin-tight yoga pants is going to earn you some lustful stares from men.

But what if that fashion choice is a deliberate red herring? Well, in that case, you may find yourself in a very weird conversation with a bro who dressed that way to prove that dudes are drawn to prominent posteriors like moths to a flame. Is it just wishful thinking that lets us assume every butt belongs to a beautiful woman? Because that can really backfire.

There are the predictable homophobic, threatening, embarrassed, and totally crazed reactions, but one guy is smart and secure enough to admit the prankster has a nice ass, Y chromosome notwithstanding. Equal-opportunity objectification: it’s a start, anyway.