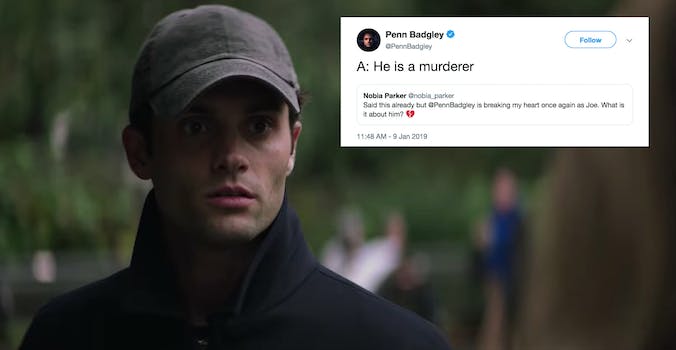 Penn Badgley: Please stop asking me to stalk you

If you spend a lot of your time on the internet, you’ve probably heard of You, a Netflix show about a man in New York City who is an obsessive, abusive partner to the women he dates. Penn Badgley plays Joe Goldberg, a manager of a bookstore who starts stalking a customer named Beck (Elizabeth Lail), as well as her friends. Over the 10-episode first season, Joe kills multiple people. Obviously, he’s not a good guy. He’s a murderer, as well as a manipulative creep.

Joe is definitely a character you’re not supposed to like—or have a crush on. But fans of the show think otherwise. On Twitter, they have been saying that they want Penn Badgley to stalk, kidnap, and/or murder them. It’s clear that most people are joking—I doubt any of these people actually want to be stalked or murdered by anyone, even a famous actor. Yet it’s still a little troubling to read tweets like “Honestly, Penn Badgley can stalk my life any day.”

Honestly, Penn Badgley can stalk my life any day.

anyone else wish penn badgley would stalk them or is it just me?

On Wednesday, Penn Badgley, who often uses social media for activism, responded to some of these tweets by fans who are romanticizing the actor’s character on You. In response to a woman who mentioned him and said “kidnap me pls,” he quoted the tweet and wrote “No Thx”.

Another woman wrote, “Said this already by @PennBadgley is breaking my heart once again as Joe. What is it about him?” Badgley responded, “A: He is a murderer.”

Then we got nothing left.

Before You, everyone knew Penn Badgley as Dan Humphrey, the character that he played on teen drama Gossip Girl. Some fans still see Badgley as Dan Humphrey while watching You—especially because the characters are eerily similar. (Dan also stalks a woman he is obsessed with, Serena van der Woodsen, by showing up at the hotel where she lives in hopes of running into her.) After a fan pointed out the characters’ similarities, Badgley tweeted, “Yeah I really should consult my agent about this huh”.

Yeah I really should consult with my agent about this huh https://t.co/cmrr7wJo9f

The association with Badgley’s former non-murderer character, coupled with the fact that Badgley is objectively good-looking, has likely sparked the outpouring of fans expressing their desire for the actor to do terrible things to them. Luckily, Badgley has taken the tweets seriously and wants everyone to know that no one should want a partner who stalks them. You depicts a completely unhealthy, toxic relationship.

As for season 2, which Netflix is currently working on, Badgley said that all the tweets are motivating him, presumably to make the character even more creepy. It looks like we haven’t seen the worst of Joe Goldberg.

Ditto. It will be all the motivation I need for season 2. https://t.co/fy2hojauDG