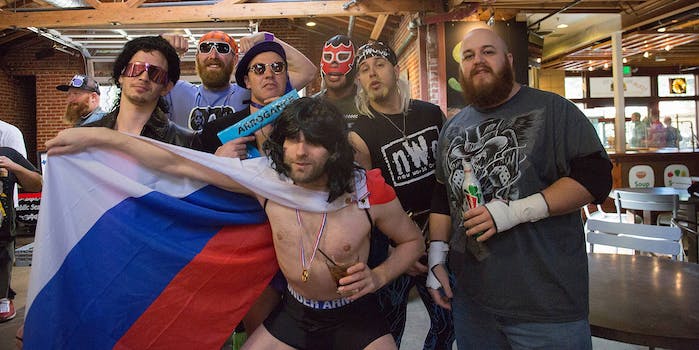 These Twitter accounts pair wrestling with your favorite TV shows

'Parks and Rec,' 'Always Sunny,' and 'Arrested Development' put on their spandex.

Wrestling is having a moment on Twitter. The social media network has been blessed with the likes of @WWESubway @WrestlingPoetry and @WWEdril—accounts that pair sports entertainment with your meals, verse, and absurdism.

Proving you can combine all three of those things and distill them into something even greater, three new WWE mashup accounts have popped up. Their focus? Pairing cult classic sitcom lines with everyone’s favorite WWE superstars.

First up is @parks_and_wwe, or Monday Night Pawnee, if you will:

We all knew Dean Ambrose had the bravado of Ron Swanson lurking somewhere deep inside him. @parkes_and_wwe just confirms it. Though Xavier Woods makes a pretty formidable Donna Meagle stand-in, the entire New Day are everything “treat yo’ self” about the current WWE product.

Juxtaposed in between quotes as saccharine sweet as a box of Booty-O’s are retweets of something far more depraved: @wwealwayssunny.

The accounts appear to be related, with the wrestling-meets-It’s Always Sunny in Philadelphia Twitter constituting @parks_and_wwe’s lone followback. Both were started in June, though they’re not the first sitcom wrestling mashups to grace social media. Meet @WresDevelopment, the Arrested Development entry in this WWE absurdist pairings contest:

I DON’T WANT NO PART OF YO TIGHT ASS COUNTRY CLUB, YA FREAK BITCH! pic.twitter.com/Ar5TMmGMsu

@WresDevelopment mysteriously stopped tweeting mid-May. There’s no reason to hang your head and wait for some sad Charlie Brown music, however. If the account can inspire two more in three months’ time, just imagine all the sweet wrestling sitcom programming gracing Twitter in half a year.

And just imagine the finishers. Who knew meat tornadoes could be so devastating?