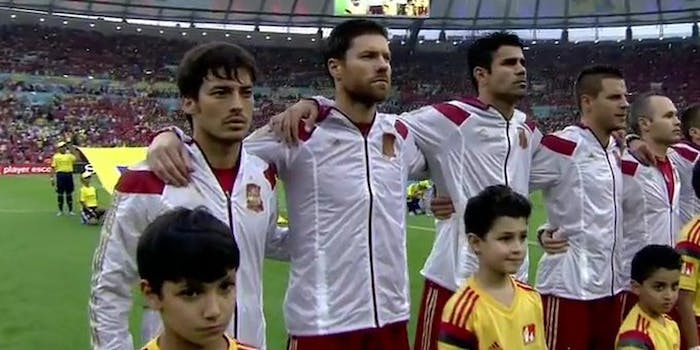 Spain is out of the World Cup

The defending champs have been kicked out in emphatic fashion.

Spain, the team whose reign atop world soccer has seemed indomitable for more than six years, has been elimated from the 2014 World Cup in emphatic fashion.

Coming into today’s match against Chile, the Spaniards needed a win. Not just to keep any hopes of advancing to the next round alive, but to hold on to any shred of pride. Netherlands had pummeled the Spaniards in their opening Group B match, pounding home five goals in what would be the worst performance by a defending World Cup champion in the tournament’s history.

But the Spanish began their match today against Chile much like they ended against the Netherlands: with narrow vision informing tepid passing. The proud Spanish national team looked like it was playing in a weekend rec league.

Chile was quick to pounce on the floundering champs. In the 20th minute, Eduardo Vargas used his second touch on a square pass into the box to snap the ball pass Spanish keeper Iker Casillas.

Spain seemed resigned to its fate for the rest of the match, never exhibiting the type of urgency you’d expect from any side at the World Cup, much less the defending champions on the verge of an ignominious exit.

This miss from Sergio Busquets early in the second half perhaps best symbolized Spain’s World Cup 2014. Given a gift of a chance after a gorgeous scissor kick brought the ball across a wide-open net, the FC Barcelona midfielder’s left foot sliced past the target. His shin bone made contact instead, and the ball drifted past the goal like a popped balloon.