How to live-GIF: Tips and tricks for covering the World Cup

Text is boring. Images, especially animated GIFs, rise above the din of the echo chamber.

Miley Cyrus twerking on stage while wagging her tongue. Ellen DeGeneres snapping the star-studded selfie of the century. Cornerback Richard Sherman ranting in a post-game interview. These are just three of the most talked-about TV moments of 2014.

Milliseconds after these events occurred, Twitter and Facebook were flooded with millions of text reactions. But text is boring. Images, especially animated GIFs, rise above the din of the echo chamber.

Over the past three years, my colleague Fernando Alfonso III and I have live-GIFed more than a dozen different events, including the Grammys, the Super Bowl, and the Golden Globes. We’ve also been invited to Tumblr HQ to live-GIF the vice-presidential debates.

In total, our animations have collected more than 4 million Tumblr notes combined and been featured on the Huffington Post, PBS, and MTV. Now, just in time for the World Cup, we’d like to share our process with you.

This is the most difficult and most important step of all. First place to start is the official website for the event. Sometimes it will feature nice, robust, high-quality streams that you can choose from. The Oscars usually have four to choose from, and the MTV Music Awards even featured a Lady Gaga cam once. Sometimes the event planners intentionally squelch the stream to eliminate broadcast competition. In cases like that, Slingbox can help. Slingbox is a media streaming service that uses a box setup in someones home in which someone can have remote access. For a minimum upfront cost of $179, Slingbox isn’t cheap, but it is by far the most reliable way to capture GIFs.

Here’s a breakdown of the some of the biggest live-GIF events left in 2014 and the best way to GIF each:

ESPN and ABC are kings of the slow-mo. After an aggressive head ball or quick breakaway goal, be ready for an immediate opportunity perfect for a GIF. There are also plenty of passionate fans who will undoubtedly lose their minds when their team scores.

MTV has a weird habit of cutting to celebrities in the audience when they’re not ready. That’s when you can catch Katy Perry getting hot and heavy with Rihanna. Then of course there’s the over-the-top performances that are always ripe with GIF moments.

A great play, the crushing look of defeat, or a victory jig are what you need to be looking for.

It’s all about unscripted celebrity reactions. These are the times when you will see a person at their most genuine—that includes Ben Affleck taking home best film and Ellen DeGeneres sneaking up behind Sandra Bullock, which collected more than 200,000 Tumblr notes combined.

Baseball is slow and often uninteresting, so this will be a challenge. But if you can GIF a winning homerun or a dugout freakout, you will reap the Tumblr gold.

Floats are a dime a dozen. You want to zero in on a new float or a performance that is particularly cringeworthy or heartwarming. A stunning marching band is always something cool to GIF.

It’s all about the tree. Make sure you start recording before it is lit and a few seconds afterward. That’s when you can catch some people embracing in delight.

CamStudio is a free video-capture and streaming program for PC that I use for our live-GIF adventures. Here’s what I find to be a good middle ground for settings in Camstudio, with Tumblr size restrictions in mind: 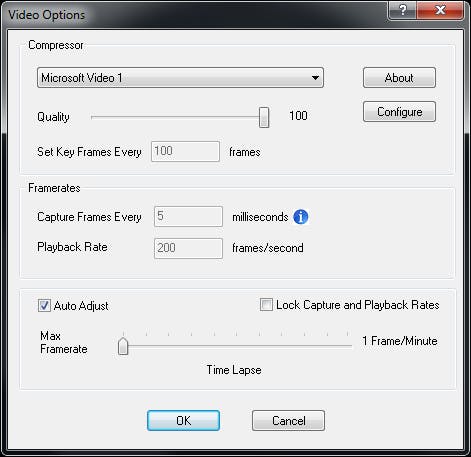 Selecting “100 quality,” with “max frame rate” capture will reduce the amount of dropped frames and “skipping” in your image. I usually leave auto adjust checked, unless I’m trying to get a very small segment of a clip or having trouble grabbing a section with a lot of movement. In that case, you can increase the keyframe frequency, but be beware of the increase in overall file size. You don’t want to capture more than seven or eight seconds in real time or else you will have a massive file to parse. If you accidentally capture a large file and try to open it in Photoshop to chop up into a GIF, you may crash your entire machine.

I never capture the audio because it’s a waste of processor speed and disk space. When I’m trying to move quickly, I want my files to be as small as possible, to reduce the time it takes to load each frame into my editing program.

If you can split-screen, do so. It’s much easier than switching between the capture area and the control area, and the sizes we’re working with should fit comfortably in one tab. 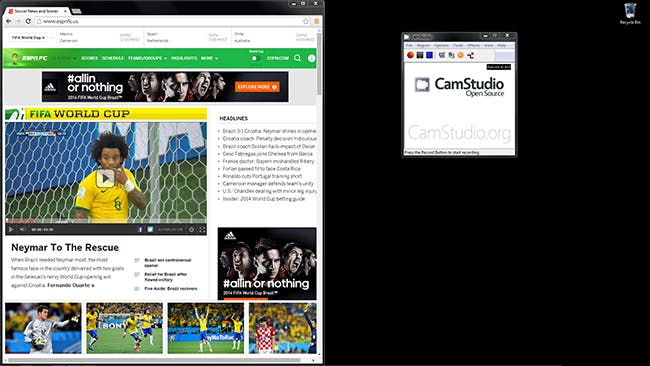 The free program VirtualDub is a little more involved to set up, but also has more control and increased capture ability (hypothetically, you could capture any stream coming across your video card, regardless of source, wink wink). Once you start to bump into the limitations of CamStudio, you may want to spend a little time checking out VirtualDub.

Since I capture more video than I need, I usually bring the clip in to Quicktime Pro to trim it down to size and export the frames. My export settings create a folder of JPEGs at 10 frames per second of video. This usually means that I can squeeze 36 frames at 500x500px into a 1MB file (also known as “Tumblr-sized”). 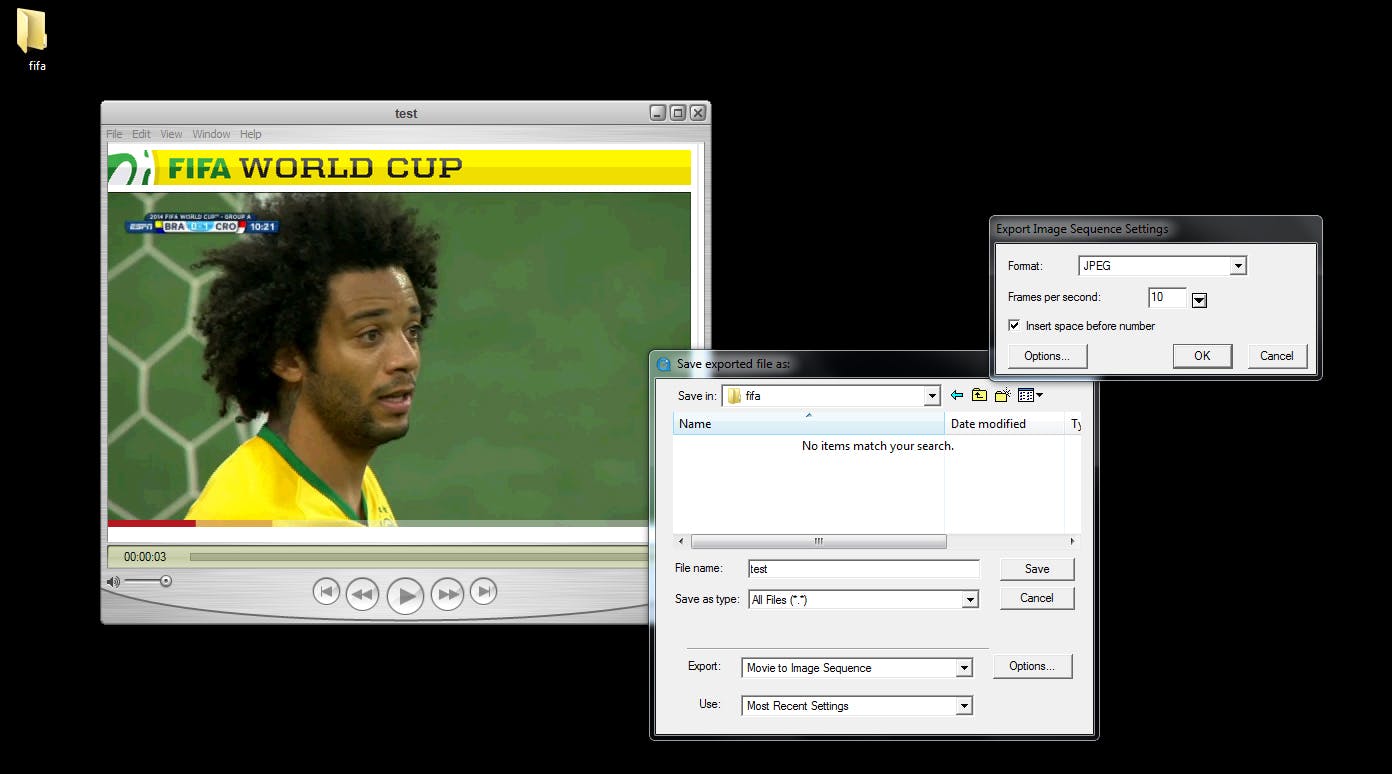 Speaking of Tumblr, the platform has recently increased its file-size allowance. Be warned, GIFs larger than the “old” limit often preview incorrectly on the Tumblr dashboard and mobile app, or sometimes display a working preview but a still-framed full version. Preview is your best friend.

If you don’t want to give Apple any of your hard-earned bitcoins, you can get good results with VirtualDub. Whatever program you use, the concept is the same. Select the segment of video and export as files. If you aren’t going to modify them at all, this GifApp software can smooth the process considerably. Just select your video file, then select the size and length of your GIF. It has a live preview, built-in effects, and a simple user interface. 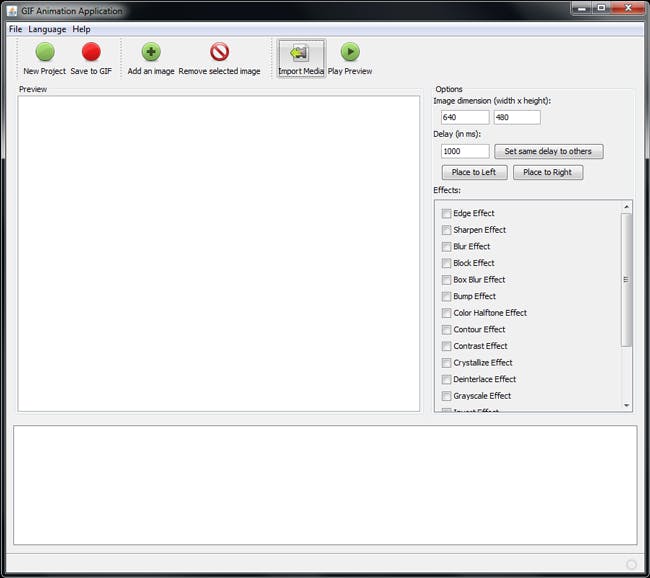 If you want to bring them into Photoshop to alter them for any reason, use File>Scripts>Load files into stack, select “folder,” and then navigate to your folder of JPEGs. Once it’s loaded, in the Timeline window, select “create frame animation,” then select “make frames from layers.” Once they load, select Reverse Frames, as they load backwards. Then select All Frames, set the time delay to .06 seconds, and “loop forever.” You can also import frames directly from an .AVI file, but I find the controls to be lacking and the output jittery.

Depending on your GIF destination, size and compression can be incredibly important. An over-limit GIF on Tumblr displays as a still image. I can’t think of a worse fate.

The Frogman explains the GIF compression issue regarding the old Tumblr limits. Aside from changing your dithering to Diffusion at 99 percent, you should be close to the 1MB limit. If you’re brave enough to withstand the possibility of glitchy previews, you can use larger files on Tumblr right now. It’s like we’re living in the future.