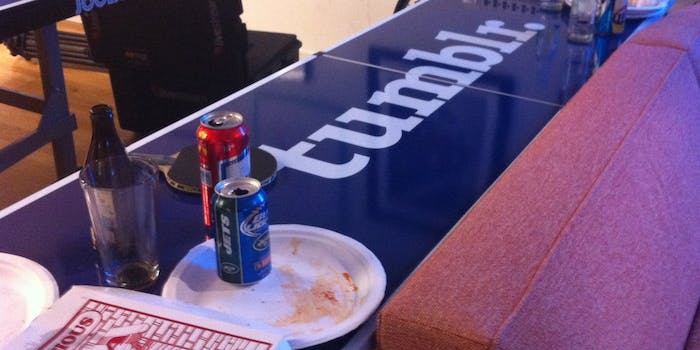 Behind the scenes at Tumblr HQ: Live-GIFing the VP debate

The Daily Dot's Fernando Alfonso III joined a team of artists and reporters at Tumblr's NYC headquarters to report the Biden-Ryan debate in GIF form.

A handful of reporters and Tumblr staffers sat on the couch below a fluorescent letter T, chatting about the latest Reddit controversy.

Pilsner glasses were tipped and liquors were mixed in preparation for Tumblr’s live GIFfing bonanza of the vice presidential debate Thursday night.

The task was simple. Using our matching MacBooks, Christopher “topherchris” Price, Bobby Finger, Dan Toth, and myself had to take snippets from the debate between Vice President Joe Biden and Rep. Paul Ryan and turn them into GIF animations.

With more than 25 people watching the debate on a projector as we churned out one new GIF every 10 minutes, the entire experience felt like the wild west, Toth told me.

“I would call live GIFfing a modern day, rapid fire, political cartooning,” he said. “I was intrigued to see how people did them their own way. There’s no set practice to creating these things.”

Biden’s fantastical facial expressions and Ryan’s rather reserved demeanor made for the perfect GIFs. After Ryan revealed that his nickname for his daughter was “Bean,” the audience around us cheered as Finger fired up Google Images to search for the best ultrasound photo he could find.

“I’m all over it,” Finger told me, as he rushed to churn out the GIF.

The master of ceremonies was Tumblr editor-in-chief Chris Mohney. While we were glued to Photoshop, he’d send us encouraging emails throughout the night with GIF tips and requests from other Tumblr users.

Then the crowd would roar, unofficially tipping us off to a potential GIF-able moment.

In total, more than 40 animations were created.

“It’s perfect for young people who are heavy technology users and who want to blend together politics,” Toth said.

Below are five of the best animations created Thursday night.