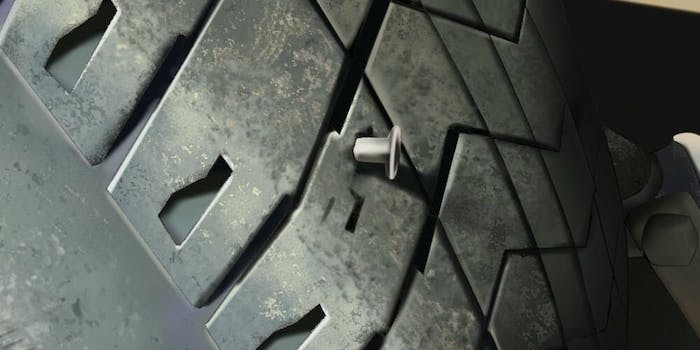 Person unconvincingly Photoshops nail in tire to get out of work

People online are laughing at–but are respecting the hustle of–a person who sent a Photoshopped image of a nail in a tire to their boss to get out of work.

Twitter user @sydneyywhitson tweeted the riveting story Wednesday morning, along with the image her coworker sent in.

“My coworker called in (yet again) and said she had a nail on her tire that caused her to have a flat. I need everyone to stop what they’re doing and ZOOM IN TO THE NAIL IN THE PICTURE SHE SENT MY BOSS,” sydneyywhitson tweeted.

my coworker called in (yet again) and said she had a nail on her tire that caused her to have a flat. i need everyone to stop what they’re doing and ZOOM IN TO THE NAIL IN THE PICTURE SHE SENT MY BOSS pic.twitter.com/4NcJGuvF4F

If you zoom in on the photo, you can tell the nail is obviously fake and Photoshopped in the picture. But some astute viewers pointed out the tire isn’t real either.

Another pointed out that it’s one of the first images to pop up upon searching “nail in tire” in Google Search.

Some users compared it to the classic “graphic design is my passion” meme.

But many respected the individual’s hustle.

“She did what she had to do,” Twitter user @TheTeeta wrote.

Naturally, many users helpfully tweeted out actual photos of flat tires for others to use the next time they can’t make it to work.

Here’s an actual picture you can use next time pic.twitter.com/v0QqrymGUc

Here y’all go.. Let y’all bosses know the reason y’all are running late is because y’all tire had a nail, puncture or gash in it and you’re at the tire shop trying to get it fixed…. You guys are all welcome pic.twitter.com/wxgyaGdR2i

And some users just had to be a little extra and encouraged employees to go big or go home when calling out.

“Just throw [this] in for a lil razzle dazzle,” Twitter user @MarciaLaRein wrote, along with a photo of a totaled car.

just adding to the thread, y’all can use this to spice things up pic.twitter.com/vhmk6GWNfR

have a gray ford fusion or a green SUV? throw this one in a text and enjoy your day off pic.twitter.com/TT5uRkbOWG

If anyone wants to use this they can. I was doing 70 on the highway and tire randomly blew out. Thank god I ain’t spin out. pic.twitter.com/u99o3tIerD