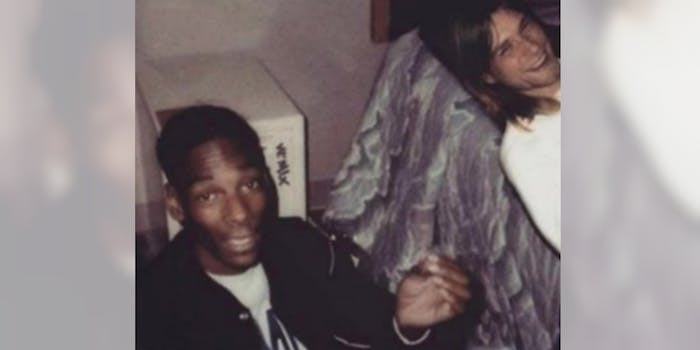 Sometimes you forget which celebrities you've smoked blunts with.

Snoop Dogg shared the incredible photo on Instagram alongside a caption stating that the moment took place in 1992.

“Young dogg with Kurt,” he wrote on Thursday.

The photo, which shows Cobain sitting on a bed while Snoop smokes a blunt on the floor, was immediately praised by countless notable musicians.

Everyone from fellow rapper Busta Rhymes to R&B singer Tyrese marveled at the iconic ’90s powerhouse.

“Wow we already know you’re legendary you just took it up a few levels!!” Tyrese commented.

As it turns out, the image was created by Instagram user _vemix_, a Photoshop artist known for placing famous musicians in photos together.

The Instagram artist responded humorously after learning of Snoop’s mistake.

“When you make Snoop think he smoked with Kurt in ’92,” _vemix_ wrote.

A Twitter user was also able to quickly hunt down the two original photos used to make the Photoshopped one.

“Yo Snoop Dogg smoked himself so stupid that foo really thought this shit was real lmfao,” the user joked.

Yo @SnoopDogg smoked himself so stupid that foo really thought this shit was real lmfao pic.twitter.com/LOWQuT6JZj

You can’t really blame Snoop for thinking the photo may have been real. The rapper has undoubtedly smoked countless blunts with countless celebrities over the years.