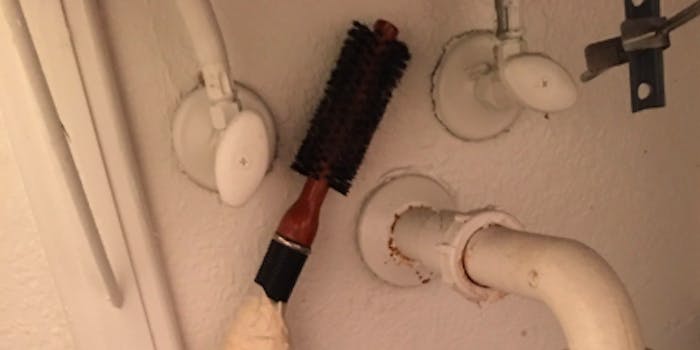 Women are sharing pictures of weird things in men’s bathrooms

This is simply unacceptable.

Anyone who has entered a man’s bathroom probably knows you never know what you’re going to get. Will there be beard trimmings lining the sink? Or will it be surprisingly clean? It can be hard to tell what you’re going to walk into. If you thought you’d seen it all, think again. There is a viral thread on Twitter where women are sharing the weirdest thing they’ve found in a man’s bathroom.

“Ladies, what’s the weirdest thing you’ve ever found in a boy’s bathroom? Allow me to start,” one person wrote on Twitter accompanying a photo of the handle of hairbrush taped to a plunger.

ladies what’s the weirdest thing you’ve ever found in a boy’s bathroom? allow me to start pic.twitter.com/WbvwM86H4b

The tweet took off and women began sharing their own horrors that they’ve encountered. The responses are shocking when you consider that people are really out here living like this. Some shared odd decor choices, like this vintage framed photo of the Jonas Brothers.

Another person shared a statue of a woman with a lampshade on top of her that she said the guys who lived there called “the mother.” I have a lot of questions about this one.

Apparently, some men have trouble maintaining a normal toilet paper holder. Women shared photos of the strangest holders, including this one with a toothbrush that wasn’t even being used to hold the toilet paper.

And this very confusing rig with pencils and rubber bands that seems completely unnecessary because the holder in the photo seems to be functional.

Others had some interesting shower methods.

Writer Roxane Gay responded to the thread saying it is “all the evidence you need to never date a man again. My god. Clean your bathrooms, men. Get some Clorox, a sponge, a toothbrush holder, a towel rack. Ugh. I am so upset.”

I think we’re all upset. What are the guys doing? Men, please get your bathroom together for everyone’s sake. This is simply unacceptable.