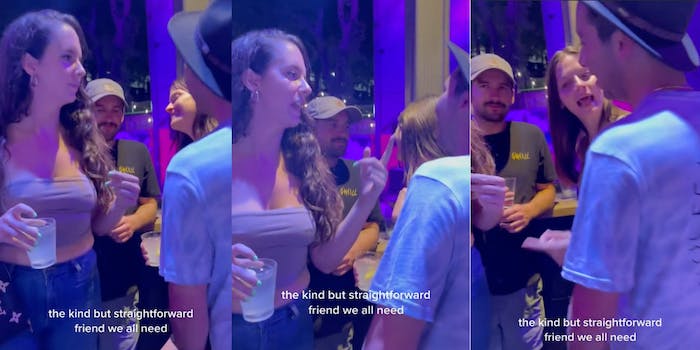 ‘I understand that you’re on drugs, but you’re being a bit of an a**hole’: Woman shuts down drunk guy at bar, becomes TikTok icon

A stunning TikTok is educating women on how to shut creepy men down in 10 seconds or less.

The brief video was posted to TikTok by user @silkysmooth___, who simply goes by Silke on the app. Despite being only 8 seconds long, the clip quickly rose to the top of the TikToker’s page, becoming her most popular video by far with more than 2 million views.

The video appears to have been shot at a bar. It shows several people crowded around with drinks in their hands, but focuses in particular on the interaction between a tall woman and an apparently drunk man. It appears that the man was making an attempt to hit on Silke and her group of friends before the video began, but instead found himself face-to-face with “the kind but straightforward friend we all need.”

Standing enough above the man to force his gaze upward, the woman politely, but firmly, sends the man packing. She informs him that, while “I understand you’re on drugs, you’re being a bit of an asshole,” before inviting the man to “take a lap.” When he doesn’t immediately take the advice, she lets out a quiet but firm “now” just as the video cuts out.

The TikTok provided an example of the friend many of us wish we had, assertive but gracious with just the right amount of unflinching confidence. Commenters rallied behind the unnamed friend, applauding her for the “iconic” response.

Several people, overcome by the woman’s advice to “take a lap,” promised to place the phrase “in a mental file folder for future use.” Everyone else found themselves too dazzled by the woman’s “alpha female energy” to focus on much else.

Numerous viewers realized, after witnessing the display of friendship, that they “need that kind of friend.” Unsurprisingly, the woman’s confident air, height, and flawless energy prompted several people to quote the “Mommy? sorry. Mommy?” TikTok sound even as they officially labeled her “wife material” and an “icon.”

Past all the thirsty messages and people dragging the man for his choice of hat, TikTok viewers made guesses about the woman’s profession outside of the friend group’s official bouncer. The vast majority of people landed on teacher, likely due to her patient but forceful handling of the situation. Nurse was also floated as an option.

Regardless of her profession, the woman has gained TikTok fame for her “mature queen behavior.” If she ever ends up revealing her identity, it will likely be to an army of adoring fans.