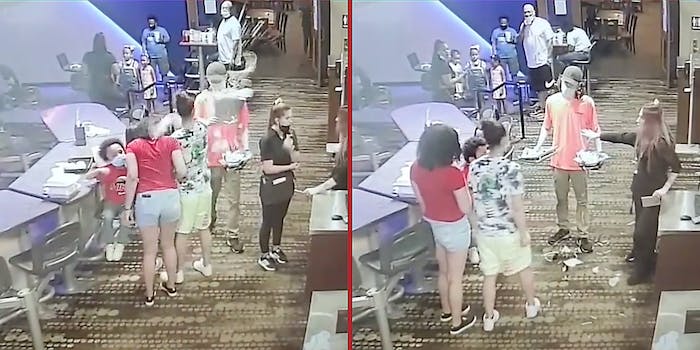 Customer smacks food out of worker’s hand in viral TikTok

'This is why I’ll never work in service again.'

Current and former service industry workers are keeping the customers who make their jobs stressful accountable with the help of TikTok.

TikTok user @engteets posted a video of security footage from his old workplace. The video shows @engteets walking by two customers while holding two trays of food. The worker apparently spilled some juice on one of the customers, who retaliated by smacking the plates of bussed food out of the worker’s hand, according to the videos. The muted video is narrated via the text overlay and text-to-speech effect: “This is why I’ll never work in service again. All that disrespect because of a drop of juice.”

The video, which currently has 5.6 million views, sparked a discussion on how people treat service workers and the severity of acts like this.

“Why do people treat those who work in service like they’re not human. Like they owe them something. Customer[s[ feels like they’re ur master or [something],” @xtantalising commented.

“Great example for those kids right in front of her,” another user, @anthony44m, said.

In a follow-up video posted on Friday, @engteets explained the situation further.

“I picked up a tray and did a swaying motion and a cup fell and it had like maybe less than a shot of Hawaiian Punch in it. It fell on the ground—not much got on her shoe but she looked at me and she immediately said ‘What the f*ck wrong with you. Are you f*cking stupid? What are you doing?’ And I said, ‘No, I’m not stupid. and I’m working’.”

While @engteets says he was upset at the situation, he decided to walk away, not wanting to cause a scene near children. He says he walked immediately home, and his co-workers escorted the customer out for flipping the food. The situation still has an impression on @engteets as he asserts in the video, “That was probably the worst Saturday of my life, and that’s why I no longer work in the service industry.”

The Daily Dot has reached out to @engteets for comment via TikTok.