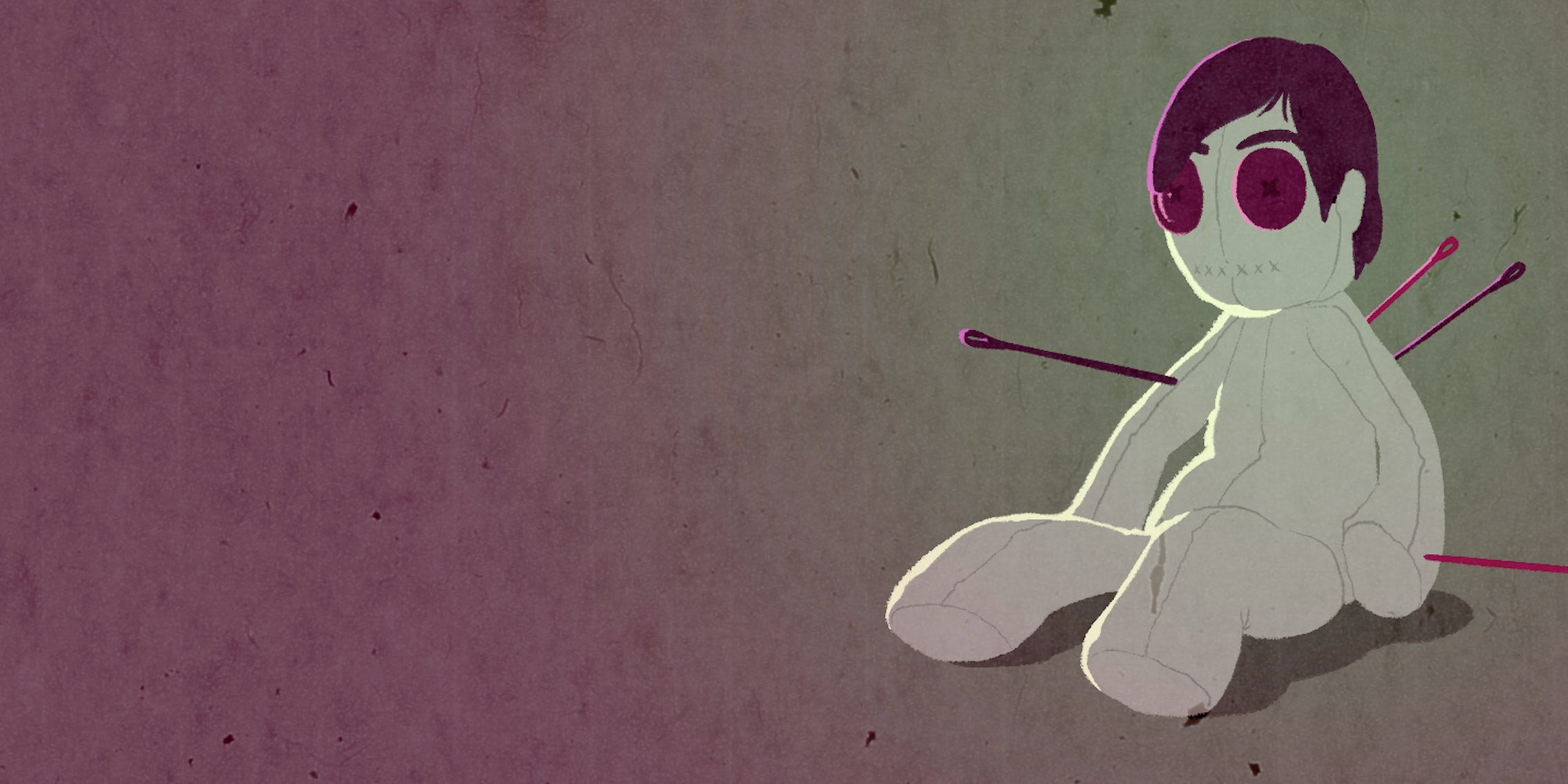 Nothing seems to work against Martin Shkreli. The entrepreneur and pharmaceutical executive first came into the public eye after jacking up the price of Daraphim, a drug often used for HIV treatment, from $13.50 to $750 a tablet. In December, he was arrested on charges of securities fraud, and earlier this month he refused to testify at a congressional hearing about the Daraphim price hike. He has an extraordinarily punchable face and is getting on a lot of people’s nerves, but the reviled pharma bro has so far avoided actual punishment for his actions.

Which is why witches needed to step in.

Howl is a New York-based witchcraft enthusiast who after watching Shkreli dodge Congress’s questions decided that spiritual punishment may be a better course of action. Earlier this month, they hosted a hex party in Brooklyn in hopes of bringing about justice and making Shkreli pay for his actions. And it may be working. We had to find out how.

Are you a regular practitioner of witchcraft?

Yeah, I would say so.

How did you first get into that?

It’s something I’ve always been really interested in. I come from a family that has a sort of traditional Christian framework, and I never felt that that worked for me. I was always the outsider or the black sheep of the family, so I was always looking for different avenues to express that desire for spirituality. I would say I’m an atheist, but I’m also kind of an absurdist, so I’m open to whatever exists. The idea of willing things to existence, it’s so witchy that I call it witchcraft, or it’s default witchcraft for people who don’t understand my complex spiritual terms. But it’s similar to The Secret or other philosophies that talk about personal empowerment and personal power to manifest things into reality.

It seems like this is a practice you’ve created for yourself, rather than adherence to a particular sect or official practice of witchcraft.

Right, it’s more of a personalized spirituality rather than a specific school or religion.

Is casting hexes a large part of your practice?

When people think of casting hexes, it’s like dark and scary magic, the black arts, and they don’t want to get near that. When in reality all we’re trying to do is get justice. The hex is not to bring anyone harm, but to make sure justice is served, and that there is a balance, and that balance is restored. In the case of Martin Shkreli, this is a person who flouts the justice system, and whose affluence shields them from being accountable. And they’re really pugnacious about it, and really jerky about it. It became personal to a lot of my family and friends, because we are affected by this. Some folks I know live with AIDS, and others rely on the medication, so that price tag is absolutely uncalled for and ridiculous. I know systemically it’s not only him. But he is a very visible part of this.

When did you first learn about Martin Shkreli?

As soon as the price hike became common knowledge, I guess. It became a name I kept hearing.

What led you to believe that performing this hex, and doing it with a group of people, was the best course of action here? Why Shkreli?

There was an article and a video that surfaced of him during his trial, and he was very smug, and he refused to answer any questions about being accountable for his actions. He was smirking, laughing, being a child through the whole trial, and pleading the Fifth to every question. That was the moment where I realized clearly the justice system is not going to do anything, and even if they do, it’s going to be a minor slap on the wrist for someone of his affluence. So let’s send a broader message. Let’s get together and not just heal ourselves and each other through this process, which is a cathartic process, but also let’s enact justice in a way that we can, as spiritual beings who are empowered to change reality.

So what goes down at a Brooklyn hex party?

It was a simple gathering that took place on Ash Wednesday [February 10], at midnight. I put out a call to some people I knew. I’m part of a queer witches collective here in New York City, and I invited some folks from there, and some other friends I know who practice and who I’ve done work with in the past. It was a really intimate gathering, though fewer people came than said they were going to come. I think they got scared. It was the first time I hosted an event specifically saying “let’s hex somebody,” so I’m sure people had images in their mind about that.

Essentially, what we did was [come to a] group agreement, setting down the framework of what it was going to be, what it was going to look like, how we felt about it, and what we needed from the group collectively. Then we started with casting a protective circle, which is a pretty common practice, just like: “I’m putting on my psychic armor now.” Once that was done, we had a wax effigy of Martin Shkreli, and a formula of hexing oil, different herbs and things all mixed into a concoction. We sent the effigy around the circle and each person anointed a different part of the effigy and expressed their desire for the type of hex they’d like to enact. For example, someone anoints the head and says they hope the ego dies, that Martin Shkreli gets over his ego and realizes the damage that he’s done and makes ammends. Or they’d hex where you’d keep your wallet and says they hope he pays financially for the financial damage he’s done to other people.

Once that goes around the circle and people feel it’s been anointed enough, we light it and let it burn for days, until it’s out. The second part of the ritual, we used a cloth doll, and took cords of black fabric and did a binding ritual. We [passed] it around the circle and each person did a binding. The first person bound the throat, so that his voice would be stifled and the truth would be heard. Other people bound the hands, bound the feet. And after that we said some final thoughts, some final moments of cathartic release, talking about how this affected us or friends of ours. We closed the ceremony, but let the wax effigy burn down, and kept the doll in its bound form.

In the aftermath of performing this, did you notice any difference in Martin Shkreli?

I don’t have a direct line to him, but someone did post an article that he lost a lot of money trying to purchase rights to a Kanye album that wasn’t released. Or, he lost Bitcoin, which I guess translates to real money. I hope that it’s working.

Have you hexed anyone in the past?

No one to this degree. I’m not really into doing hexes, but I felt like there was a need and an opening for this to happen.

There are a lot of people out there like Martin Shkreli, whom others would think deserve to be hexed. If this is working, presumably that’s a lot of power you can use against somebody else. How do you determine who is worthy of this, and ensure that you’re not abusing this power?

The word “hex” is kind of a sensationalist word. I’m sure there are plenty of practices where the goal is to bring harm to someone you don’t like, but that’s not necessarily the practice I employ. If I do go to this extreme, it’s to ensure that someone who is doing wrong is held accountable and pays for their wrongdoing, rather than because I just don’t like someone. Like, this person will get away with doing so much harm. And I can’t do anything in a financial way, the systems of capitalism alienate the poor from any measure of justice or assertion of voice and power, so what can I do? And this is one method.

People do this all the time in very minor forms. They’ll see Martin Shkreli and say “I hope he gets hit by a bus,” or something, and that’s a very minor hex that you just said out loud and put into reality. You wished that. It’s a very common thing we do all the time without even realizing it. The ritual of bringing people together and doing it in a way that’s accountable to each other. We’re not going to hex through our teeth, we’re going to put this on the table and work it out.

When you are waiting for someone to shut up so you can end their life. @MartinShkreli pic.twitter.com/eMEBsoRhnA

By the end of this event, how did you feel?

I feel like we did something. Whether or not it has any physical ramification for Martin Shkreli—and we didn’t even need to do a hex for him to be hated and reviled—it really helped more with myself and my community to heal from this damage that’s been done, this attack on our community. It helps us have a cathartic release. We can’t do anything literally against Martin Shkreli, but we did something that made us feel powerful.