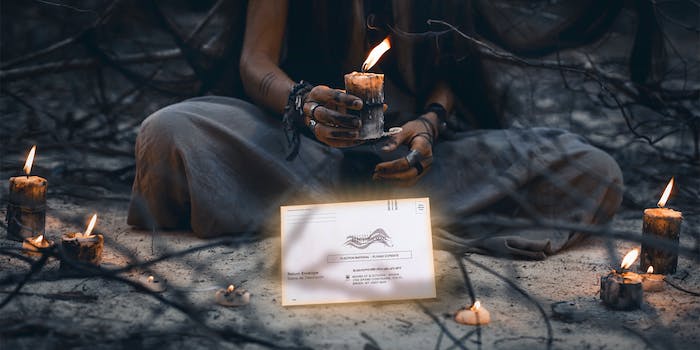 Witches are using the Halloween blue moon to cast out Trump

Can WitchTok help the blue wave?

Back in July, the WitchTok community was rocked by controversy: A group of newer witches allegedly tried to hex the moon. But a tide has turned, and now the same moon is being used to hex Trump and help with a blue wave.

On Halloween night, we’ll see a rare blue moon, meaning it’s the second full moon in the same month. But this Halloween moon will also be viewable across every time zone for the first time since 1944. Witches are taking this lunar event very seriously and using it to cast spells to help Biden win and push a blue wave.

While movements like Magic Resistance have focused on hexing and “binding” Trump since he entered office, WitchTok isn’t an overtly political space. That has changed, as members of Gen Z got more politically involved, or potentially voted for the first time. Over the summer, WitchTok generated hexes for police officers and protection spells for Black Lives Matter protests taking place across the country.

Michael Hughes, creator of the blue wave spell many will be invoking on Halloween night, told Wired that “young people are moving away from traditional religion and toward being more open and compassionate and inclusive of marginalized communities.” There are pro-Trump witches but they seem to be sticking to Facebook. As anthropologist Sabina Magliocco told Wired, evangelicals are allegedly countering anti-Trump spells by praying “at the same time to create a shield of prayer around the president that is supposed to repel the magical onslaught of his enemies.”

Notably, during the first full moon on October 1, Trump announced he had COVID-19. Witches on TikTok claimed to have manifested it.

Hughes originated the blue wave spell during the 2018 midterms, but stated on Medium that you don’t have to be a witch or believe in magic to do the spell. As TikToker nymphwitch said last month, the “spiritual energy” on Oct. 31 will be “very strong” and “all spell work will be amplified.”

As The Worst Witch already predicted: Anything can happen on Halloween.