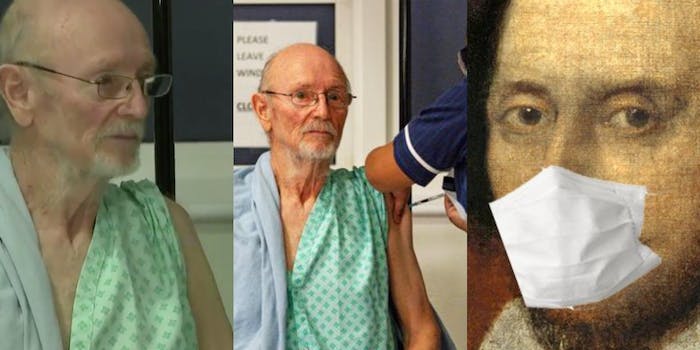 The wheel is come full circle: Shakespeare gets the COVID vaccine—and there are memes

In a new viral video on Twitter, an Englishman named, ahem, William Shakespeare received a COVID-19 vaccine shot. The Warwickshire native (the same county as the famous bard) was one of the first patients to get the newly approved coronavirus vaccine outside a clinical trial.

Most predictably, Twitter had a field day with creating memes and applying puns to his name.

ABC News tweeted the video with the caption playing on one of the more prominent Shakespeare plays, The Taming of the Shrew: “TAMING OF THE FLU: As the U.K. began administering COVID-19 vaccines to the first patients outside of trials, the second man to get one was named William Shakespeare.”

In the video, following the shot, the current Shakespeare speaks on the importance of the vaccine: “It could make a difference to our lives from now, couldn’t it? It’s started changing our lives and lifestyles.”

@TiernanDouieb joking tweeted: “Actually I heard the second person to get the vaccine was Christopher Marlowe but William Shakespeare took all the credit.”

The best pun is from @annemariealex, which takes the famous speech in Macbeth, from the titular character: “Is this a dagger which I see before me, The handle toward my hand? Come, let me clutch thee. I have thee not, and yet I see thee still.”