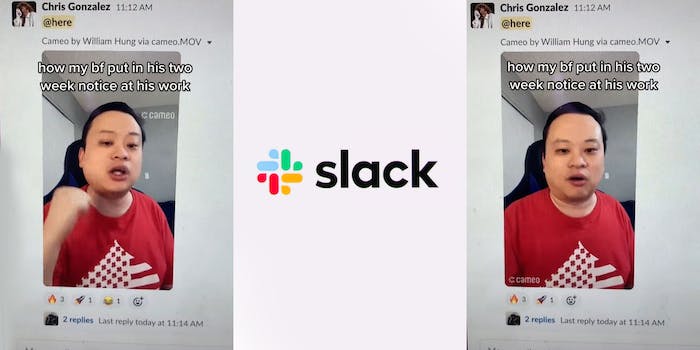 ‘@here’: Woman hires William Hung to put in 2 weeks’ notice to everyone on Slack

'Companies can’t even give two weeks' notice for laying people off yet someone can do this?'

A woman’s Cameo of William Hung announcing her boyfriend’s intent to resign via two weeks’ notice has viewers respecting the power move.

In the video, @joellenlove shows the Cameo having been posted to her boyfriend’s Slack channel, tagging everyone in the chat so that they would see the message.

“Hi everyone, this is William Hung,” the infamous American Idol contestant says in the Cameo. “Christopher is going to put in the notice to leave the current job for a new job in two weeks. He found a new job. He’ll miss all of you, but you’re all amazing. So, don’t give up creating the life you want. Here is a song for you.”

@joellenlove and yes that is a William Hung original, not a cover #jobtips #worklife ♬ original sound – Joellen Lu

Hung then begins singing his song, “Just Do It,” for the remainder of the video. He first gained notoriety via a failed 2004 American Idol audition in which he attempted to woo judges with a performance of Ricky Martin’s “She Bangs.” Since then, Hung has continued pursuit of his musical career independently and become a motivational speaker, giving multiple TED Talks.

Viewers were glad to see Hung was “thriving” in his career so long after the 2004 audition.

“Love to see that William hung is still thriving,” one commenter wrote.

“I hope that William has had the best life,” another commenter wrote. “He is such a treasure.”

“A friend had a karaoke party at his house a few years ago,” a commenter wrote. “William saw it on FB and randomly showed up lol! He’s definitely a cool guy.”

Others praised Christopher, the poster’s boyfriend, for his grand exit.

“I’m a housewife but I imagine if I’m leaving this job and getting a divorce, this might be the right approach,” one commenter wrote.

“companies can’t even give two weeks notice for laying people off yet someone can do this?” a commenter wrote. “Sheesh.”

“The best part is that he tagged @here so literally everyone was notified,” another commenter wrote. “Iconic grand exit!”

The Daily Dot has reached out to @joellenlove regarding the video, as well as to Hung via Instagram DMs.