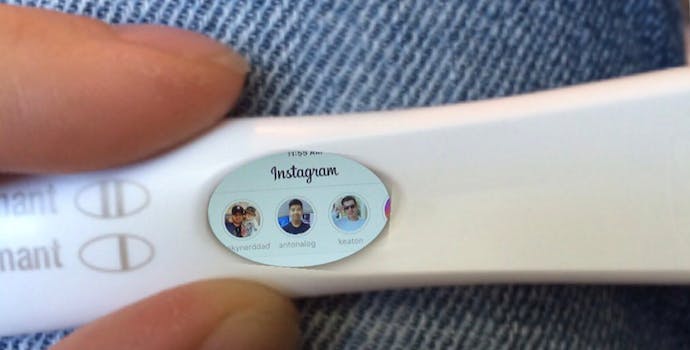 In 2017, everything will have a ‘stories’ feature—whether you like it or not

Snapchat‘s innovation of temporary videos and pics that expire after a time limit has inspired imitation “stories” features from Instagram and others, and now Facebook‘s mobile app has “stories” too. You’ll even get punished with lower visibility if you don’t use the feature. Does everything need to have stories? Apparently so, and now there’s a meme that comments on the dumb trend.

The “will have stories now” meme applies to anything, whether it’s an app or not. It’s funniest when it’s used on something private that you really wouldn’t want to share with your Facebook feed. Like a pregnancy test:

Or your traffic ticket:

tickets in 2017 will now have stories pic.twitter.com/OVYDuFcm9I

It’s also funny to add “stories” features to something that already had stories in the more literal sense. Remember books?

In 2017 books will now have stories pic.twitter.com/30qvjWiHht

The problem with the meme is that it has become “normie”—the memer’s word for “mainstream”—very quickly, and some of the iterations are arbitrary and unfunny. The trend is becoming less of a commentary on the pervasiveness of the “stories” feature, the constant demand that we share our lives in real time on dozens of social apps, and more of a game of putting stories onto… whatever.

Stories on a hammer? Stories on Donald Trump? Where’s the joke?

Hammers in 2017 will now have stories. pic.twitter.com/ovfRXGgDsw

Donald Trump in 2017 will now have stories pic.twitter.com/9dfijcBPsf

The overarching theme that stories have gone too far is still represented by the whole corpus of “will now have stories memes,” but most of them just aren’t that clever on an individual level. The meme is still popular, though, and can be expected to stay that way through the rest of the week, simply because it’s so easy to participate in. How hard is it to Photoshop Instagram stories onto an object? (Not very.)

Anyway, welcome to our dystopian, surveillance-state-driven future, where we voluntarily broadcast what we’re doing all the time. Even if we joke about it—and this meme is a halfway-decent joke—we’re not going to stop participating. Who wants to miss out on what everyone else is doing?