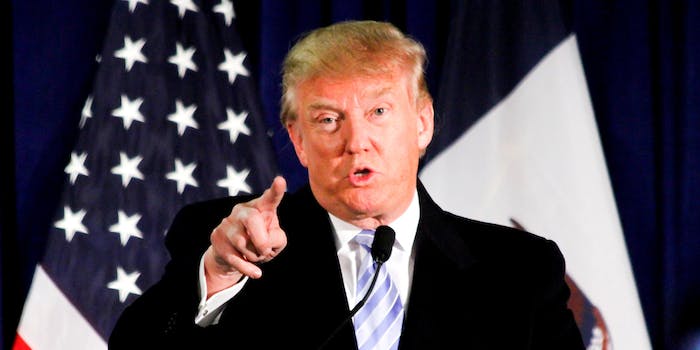 Why we love conspiracy theories

The Internet is good at telling us exactly what we want to hear.

Donald Trump has made a career of validating the most fringe beliefs in our politics. The first time the current Republican frontrunner topped presidential polls was back in 2011, when Trump led a month-long public campaign to force President Barack Obama to unveil his birth certificate. He started his 2016 campaign by acerbically accusing the Mexican government of sending criminals to the United States and, along the same lines, charged Middle Eastern countries with using the refugee crisis as a method to shed themselves of likely terrorists. More so than any presidential candidate in recent memory, Trump has appealed to the most paranoid, xenophobic, and delusional conspiracy theories of our time.

He does so not as a masterful political tactician or manipulation of the media, as some have suggested. Nor is he a man so swept up in his own mission for popularity he has abandoned reason in favor of a caricature of what he believes people want—like the spy-turned-Nazi-propagandist in the Kurt Vonnegut novel Mother Night. What’s becoming increasingly clear is Trump is suffering from the same desperate need for confirmation bias that drives many a forum, subreddit, or email chain into fearful and absurd notions about government and the way people run it. Trump is maligned by the Internet’s habit of giving us exactly what we want to hear and convincing us it’s the whole truth.

He continued this trend this week when, on fellow conspiracy theorist Michael Savage’s radio show, Trump toyed with the idea that the recently-departed Supreme Court Justice Antonin Scalia was murdered. After Savage suggested a “Warren Commission” was needed to investigate the questionable circumstances of Scalia’s death (because that investigation worked so well at dousing conspiracy theories), Trump responded that he’s “hearing it’s a big topic” and adding “they say they found a pillow on his face, which is a pretty unusual place to find a pillow.”

The world is much more intriguing when seen through a conspiracy theorist’s eyes, filled with deception and masterful puppetry of real people and events.

While not a full-throated endorsement, it is the highest profile acknowledgement yet of a the stewing theories surrounding the death of the controversial SCOTUS member at a luxurious Texas hunting resort. Questions have been raised about a local judge’s decision to not conduct an autopsy and to declare Scalia dead before ever seeing his body in person (basing their judgement on first-hand accounts from police and a phone call with the official physician of the Supreme Court).

The matter was not helped by former Washington, D.C., criminal investigator William O. Ritchie who openly criticized the decision not to perform an autopsy and called on investigators to do so before Scalia is lied in state at the Supreme Court building. “As a former homicide commander, I am stunned that no autopsy was ordered for Justice Scalia,” Ritchie told CNN. “My gut tells me there is something fishy going on in Texas.”

Ritchie, Trump, and the thousands that have developed such theories even further are, of course, missing some key sets of facts. The first is Scalia reportedly suffered from numerous chronic health problems including high blood pressure, “heart problems”, and was even recently deemed unfit for a shoulder injury. The second is police investigated the scene of his death and, not only ruled out foul play, but have corrected the notion that a pillow lie across his face—as if Tony Soprano had wandered in and smothered Justice Scalia in his sleep.

But these are boring facts. The world is much more intriguing when seen through a conspiracy theorist’s eyes, filled with deception and masterful puppetry of real people and events. Chipotle didn’t suffer from a standard outbreak of food-borne illnesses—Monsanto sabotaged the popular burrito chain for refusing to use genetically-modified produce in its menu. Ted Cruz isn’t a lifelong Christian as every detail of his biography confirms—he’s actually a secret member of a Satanic cult. What’s more exciting than landing on the moon or more terrifying than a few ambitious terrorists bringing down the World Trade Center? An authoritarian government that manages to fake both. The only thing more impressive than Stevie Wonder,  a world-renowned blind musician, would be someone who’s managed to fake his ailment for decades.

This need for intrigue, combined with an egotistical desire to believe you’re one truth above the “sheeple” that surround you, is what fuels a mind like Donald Trump’s. The real estate magnate famously keeps himself well-armored by scores of yes-men who are willing to confirm his infallible nature. He spends his time on Twitter not engaging with the many, many people who voice disagreement and disdain for him but, instead, retweeting and quoting people who praise him. In fact, Trump seems to use Twitter to engage with exactly the kind of conspiracy theorists he inspires, posting fake statistics that seem to confirm his supporters’ worst fears and commendations from a significant number of accounts run by white nationalists.

“We all have a natural inclination to give more weight to evidence that supports what we already believe and ignore evidence that contradicts our beliefs.”

This does not make him an egotistical demagogue (though there’s plenty of evidence for that). At the most, Trump is only an extreme product of the same forces that influence how we all consume information through mass media. As Christopher French, a professor of psychology at Goldsmiths, University of London, points out, confirmation bias is the leading mental effect that creates conspiracy theorists like Mr. Trump. “We all have a natural inclination to give more weight to evidence that supports what we already believe and ignore evidence that contradicts our beliefs,” writes French in Scientific American.

It’s one reason Fox News is far past its counterparts in the ratings—it picks at this desire to be told our basest assumptions represent reality. The Internet, however, worsens this effect by overwhelming us with feedback and information and encouraging us to only seek out the things we like. A study by KAIST Graduate School of Management found people flooded with information and comments online are most likely to parse out and ignore the ones that contradict their initial feelings about a topic. Researcher Eli Pariser has long warned of “filter bubbles”—an effect caused by the algorithms of Facebook, Google, and others which restricts our view of the news and content to what we’re most likely to click and like as opposed to a more fleshed out version of the truth.

In more ways than one, the Internet is to us what Trump’s cadre of loyal, faithful advisers are to him. One of the most dangerous traps of achieving a powerful status—be it in wealth or political achievement—is people will often tell you whatever you want to hear in their own selfish bid to please you. Often without us realizing it, this is how the Internet treats all of us. It denies us the truth and, instead, tries to make us happy. This is not only how we fall into conspiracy theories, but it’s also a cause for the increasingly rigid partisanship that continually divides us. Trump might find himself in a position to do more damage with such a deluded point of view, but he’s powered by regular people who see themselves in him. Not because they want to, but because it’s all they allow themselves to see.