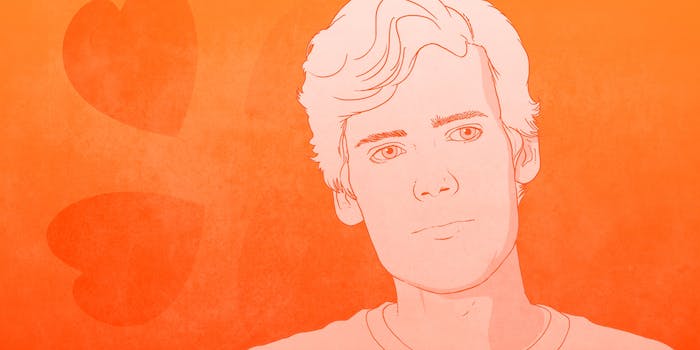 Christopher ‘moot’ Poole tells us why he left 4chan, and what’s next

As any father can tell you, the hardest part of raising children is watching them grow up and away from you.

Christopher “moot” Poole, then a teenager living with his mom in New York, founded the site 4chan in 2003. He’s since been the proprietor of an often controversial site that’s landed him in court and on stage at TED. Now he’s saying goodbye.

Poole is stepping down from 4chan and relinquishing the site’s day-to-day management and upkeep to a group of three volunteers.

Being 4chan’s only employee has never sat well with Poole.

“4chan has faced numerous challenges over the years, including how to continuously satisfy a community of millions, and ensure the site has the human, technical, and financial resources to continue operating,” Poole said in a blog post today. “But the biggest hurdle it’s had to overcome is myself. As 4chan’s sole administrator, decision maker, and keeper of most of its institutional knowledge, I’ve come to represent an uncomfortably large single point of failure.”

To remedy this single point of failure, Poole began planning his exit years ago, he told the Daily Dot in a phone interview. The goal was to turn 4chan in a nearly self-sustaining entity that would need minimal interaction from his small group of volunteers. Today 4chan is, as Poole told me in October 2013, in a place where it can outlive him. Proof of that is in the data Poole shared in a tweet yesterday:

Eleven and a half years of @4chan, in numbers: pic.twitter.com/YhzUy0XbvQ

“The site isn’t in danger of going under financially any time soon, and it’s as fast and stable as ever thanks to continued development and recent server upgrades,” Poole wrote.

The future for 4chan is unclear, but Poole remains optimistic.

“I see a lot of opportunities for the site,” Poole said Wednesday afternoon. “I think communities are on the up and up, right now. There’s a lot of potential for the site to grow. Or for whoever takes over the site after me, to invest in things I didn’t have time or resources for. I would love to see a 4chan mobile app and more international support and user governance. There are a lot of places to take 4chan.”

Here’s a transcript of our conversation, edited for length.

A year ago today you announced that you were shutting down DrawQuest and Canvas. Did you plan on making your 4chan announcement a year later?

It was coincidental. I had realized it a day or two ago because I originally intended to publish it yesterday. I had wanted to publish the 4chan thing toward the end of January and it just worked out that way. Turns out Jan. 21 is a quite the day for me. It’s been a year or two in the making. It wasn’t a question of if, it was a question of when.

“People asked, ‘What happens to 4chan if you die?’ For a long time the answer was pretty grim: ‘I guess 4chan dies too.’”

People asked, “What happens to 4chan if you die?” For a long time the answer was pretty grim: “I guess 4chan dies too,” because I was the holder of all the keys, the sole administrator. 4chan has a handful of volunteers, but all of that responsibility bubbled up to me. And I realized that’s not healthy and good for the future. If something were to happen to me, a site that 20 million people use shouldn’t have to pay that price. I set about more than a year ago to address that the best I could; to try and ensure the site was in the best place as possible. I started to elevate other people on the team and empower them. We serve more pageviews now than we ever have. The site is in the best place it’s ever been. Things are in a good place, and if I were to get hit by a bus tomorrow, things would find a way.

Did any of the drama surrounding the leaks of thousands of nude celebrity photographs across 4chan last fall influence your decision?

Not really. It didn’t affect me in terms of this decision. It was certainly stressful. It didn’t help. But the decision was made independently a long time ago. It was just time.

Is there a rough number you could suggest for how much time you’ve invested in the site daily and in total?

No less than 10,000 hours. I’ve used 4chan every day for 11 and a half years—at least an hour browsing a day and many days spending eight hours working on servers or two hours programming.

Can you talk a little bit more about transferring the everyday running of the site to this foundation?

We don’t have any employees. It’s an LLC and I’m the only member. There are three core people other than myself. A developer who has done most of the development over the past few years. One person is someone who used to be a developer but now helps with server stuff. And then somebody who I made the “managing moderator,” a “general manager” of sorts. This person does the janitor orientation and rule clarification. I started to delegate that stuff awhile ago. Those three were the only ones who knew about my decision before the post was made.

From the user perspective, nothing will change. The site has enough money in the bank and the servers are working. There’s still dozens and dozens of volunteer moderators and janitors. This should be totally transparent from a user’s perspective.

How /b/ reacted to the news of Poole’s departure.

Who will continue to handle 4chan’s business side?

It’s really hard to delegate that. At some point I will not even own the company anymore. I don’t know what that looks like because I have no idea. In the short term, I will be paying the bills and I’ll be the sole legal entity. It is my goal to transition out of that as soon as feasibly possible. But I honestly have no idea what that looks like or who my successor will be.

It was a miracle that I myself, alone, shouldered that burden for as long as I did.

You mention that you may not own the company anymore in the future. Are you looking for buyers?

I’m not actively talking to anybody right now. It is something I would be amenable to. One of the things I struggled with in terms of passing on the site was that, frankly, it was a miracle that I myself, alone, shouldered that burden for as long as I did. The reason why I was able to shoulder the burden was while I was growing up, the site was growing up. I had time to scale with it. My big concern with giving the site to somebody would be that, it’s all of sudden, there’s a shit-ton of responsibility. It’s really jarring. I think the most ideal successor is an organization of some kind where multiple people share the burden. I just made the announcement so we’ll see how it goes from there.

What is on the horizon for you now?

I don’t know. I think that, unlike last year, I’m in a much better place. When I made the Canvas announcement—trying to sell the company, then shutting it down and dissolving it—that happened very quickly. I’m in a better place emotionally. I’m feeling really good about going and doing something new. That’s not to say I want to start something. I don’t know what the next few months look like or what I’ll be doing next but I am ready to jump into something. I’m ready to reinvest myself. I really don’t have any obligations to anyone anymore, at least in terms of my time.

4chan’s anime board, /a/, reacting to the news.

Do you get a sense of relief now that you’re passing the torch?

Emotionally, I am in a really good place. Yes, it’s been high highs and low lows in ways that few people will ever know. I’ve almost reached this point of zen. I have a lot of nostalgia. I’m proud of what this community has done and that I’ve been apart of that. So few communities reach 4chan’s size, ever. So few communities last 10 years. There are even fewer people who singlehandedly preside over a community of millions. I just feel positive emotions right now. I think that’s also the reason why it’s a perfect time to move on. I don’t have regrets.