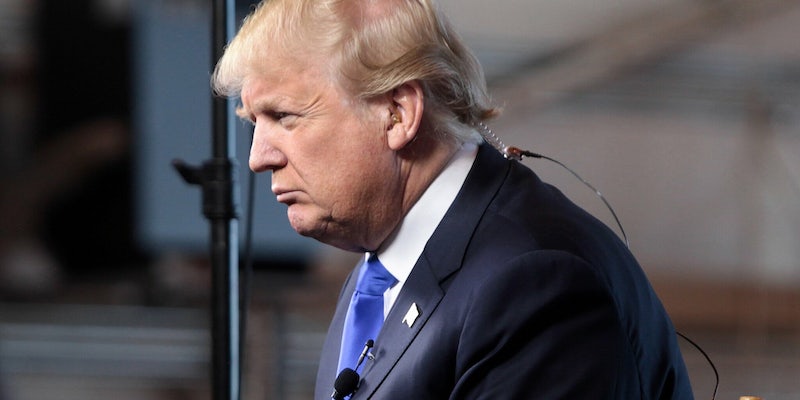 Why journalists should be afraid of Trump’s media strategy

Donald Trump's approach is different, and it's working.

As someone who fights for the rights of journalists, I’ve been following the U.S. presidential campaign with a particular concern. What strikes me is how the candidates use both traditional and social media to generate attention. The Trump campaign, in particular, is making me apprehensive about the safety of journalists around the world. Let me explain why.

Donald Trump entered the campaign back in June by making a patently offensive and outlandish statement—Mexican immigrants are rapists. The sheer outrageousness of his remarks—not to mention the furious reaction—made Trump’s comments newsworthy and generated a flurry of media coverage. There were plenty of denunciations, but those who agreed with Trump’s message were not only made aware of his campaign but were made aware of each other. They began to self-organize into a virtual community that has helped fuel support for the Trump juggernaut.

Since his initial foray, Trump has brilliantly refined this model. Every time he needs to raise his visibility, change the subject, or respond to an attack, he says something outrageous and the cycle starts again. Trump is hardly the first candidate to operate at the intersection of social and traditional media. The 2008 Obama campaign used social media in innovative ways, utilizing community organizing strategies to create a robust and engaged online community of supporters.

His strategy is to shock the media system by being outrageous, offensive, or provocative.

But Trump’s approach is different. His strategy is to shock the media system by being outrageous, offensive, or provocative. The shock can be delivered either through traditional media—for example, by mocking the disability of New York Times reporter Serge Kovaleski at a campaign rally—or via social media. Trump’s Twitter feed is a stream of invective directed against his rivals and the media. (David Brooks is “the dumbest of them all,” Fox announcers are “clowns.”)

As a new study on election influencers from a research group at MIT Media Lab put it, “[T]he old influence hierarchy has been shattered, replaced by a new mosaic of influence in which social media play a growing role.” It rated @RealDonaldTrump as the top influencer, describing him as a “master of both domains.” William Powers, one of the study’s authors, noted that while Trump is clearly not a digital native, he was “ahead of the curve in that he learned how to become his own media outlet long ago.”

While the MIT study focuses on Twitter—where Trump currently has more than 6.8 millions followers—Trump also has huge followings on Facebook (6.3 million likes), and YouTube (4.1 million views on his channel). Trump’s Twitter numbers dwarf his Republican rivals—Marco Rubio has 1.3 million followers—and he comfortably tops Hillary Clinton, who clocks in at 5.7 million followers.

The continuous erosion of traditional media’s power in the United States is part of a broader global dynamic that is putting journalists at greater risk.

Regardless of your views on Trump, a media system with fewer gatekeepers is exciting because it allows unconventional forces to overcome the institutional barriers and get their messages out. But there is a big downside, which is that the continuous erosion of traditional media’s power in the United States is part of a broader global dynamic that is putting journalists at greater risk.

This is because what keeps journalists safe is not just legal protections and institutional safeguards. It’s also their usefulness to powerful forces seeking to communicate with the public. Politicians have always had a certain disdain for the media, but they treated journalists with some deference because they needed them. Even insurgent and criminal groups routinely cultivated the press. Journalists working in conflict zones understood that it was not respect for the Geneva Conventions that kept them alive. If was the information monopoly that journalists exercised collectively, which made them indispensable to the warring parties.

The shifting power dynamic plays out differently in different spheres. For example, if you want to find out what President Barack Obama has been up to, you can skip the nightly news and watch West Wing Week, a slick video roundup produced by the White House and distributed through social media channels. The White House routinely grants unfettered access to the president’s official photographer while restricting the press pool, a policy denounced as “Orwellian Image Control” by AP’s photo chief. The fact that the Obama administration does not need to rely on the traditional media to deliver its message makes it easier to keep journalists at bay. In a 2013 CPJ report on The Obama Administration and The Press, New York Times correspondent David Sanger declared, “This is the most closed, control freak administration I’ve ever covered.”

The dynamic plays out more harshly in repressive countries like Russia, where Vladimir Putin has cracked down hard on the independent press while developing a parallel propaganda network that covers news as dictated by the Kremlin. In fact, Putin has used state-controlled media to rally support for military interventions in Ukraine and Syria and to undermine Western policies and interests around the world.

An even bigger transformation has taken place among criminal and militant groups—from drug cartels in Mexico to Islamic insurgent groups in Syria.  Where these groups might once have cultivated journalists and granted exclusive interviews, today the more common method of grabbing media attention is to carry out an atrocity, document it, and post it to social media. They rely on coverage from the traditional media to amplify their message of terror.

The strategy works because it relies on the media ecosystem as a whole, not relationships with individual journalists.

The Islamic State is the most gruesome example, and the subjects of their terror videos are often journalists themselves. This changing power dynamic explains why we’re in the most dangerous and deadly period for the media in recent history, according to CPJ research.

Of course, Trump insulting immigrants is not the same as ISIS cutting off heads, but the principle is similar. Use dramatic and shocking action to get attention; rely on social media to control your message, engage critics, and mobilize support; depend on the feedback loop between social and traditional media to reach a mass audience.

The strategy works because it relies on the media ecosystem as a whole, not relationships with individual journalists. Trump can expel Jorge Ramos from a press conference for asking an impertinent question; intonate that Megyn Kelly has it in for him because she is menstruating; threaten to sue journalists and tighten libel laws; repeatedly denounce all journalists as “scum,” and show indifference toward reporters roughed up or even arrested while covering his events—and still get precisely the coverage he needs.

The media relationship is defined by power, and as the power of traditional media ebbs, the relationship between journalists and those they cover is redefined. Trump’s media strategy is confirmation that the most effective way to get media attention today is to engage in shocking behavior, use social media to control your message, and rely on traditional media to amplify your voice. As long as that strategy works, it will be used. That’s bad news for the U.S. elections, but even worse for journalists working in dangerous environments who depend on their utility to keep them safe.

Joel Simon is a columnist for the Columbia Journalism Review and the executive director of the Committee to Protect Journalists. His second book, The New Censorship: Inside the Global Battle for Media Freedom, was published by Columbia University Press in November 2014. Follow him on Twitter @Joelcpj.

A version of this story originally appeared in the Columbia Journalism Review and has been reprinted with permission.