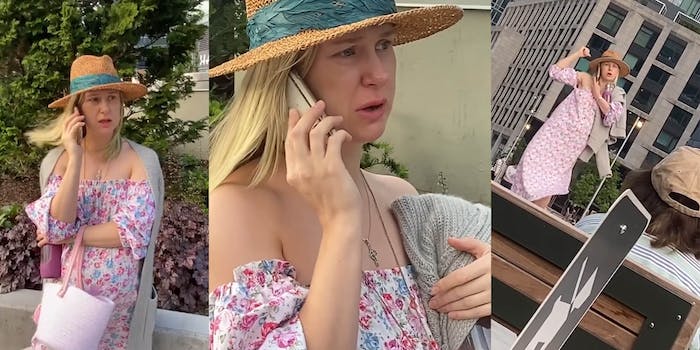 'If Bozo was a person, it would be you!'

The worst time to be a racist white woman is all the time, but especially in the middle of nationwide protests for George Floyd and one week after another white woman got doxxed to high heaven for calling 911 on an innocent Black man. Nevertheless, that’s exactly what a white woman in New York City’s Upper West Side did over the weekend, repeatedly calling the cops on a Black woman for *checks notes* sitting on a bench and minding her business.

The white woman in question is Svitlana Flom, as identified by the Black woman who shared videos of the confrontation on her Instagram (@_brownsugarbaby). Flom can be seen making multiple calls to the police, feigning distress, pacing up and down the street, and waving her arms in a desperate attempt to… flag down an officer, I guess?

@_brownsugarbaby alleges that Flom spent a whopping hour and 16 minutes trying to call the police. In that time, several unassuming children walk by her, eager to leave the vicinity of the embarrassing showdown. A man wearing a face mask, whom @_brownsugarbaby identifies as Flom’s husband, even leaves the scene without saying a word.

Flom accuses the woman of “playing the Black card” and “attacking” her and her children. (Flom, who appears to be pregnant, must be referring to her unborn children, because she is otherwise alone when she calls the police.) Incredibly, Flom at one point even asks the Black woman she is harassing to walk to the police station with her.

“Can you imagine that?” the Black woman says incredulously on the video. “If Bozo was a person, it would be you!”

According to Complex, police eventually arrived at the scene but declined to take any action.

Flom apparently runs the @artdefete Instagram account, which is now set to private. She is a self-appointed food, fashion, and travel blogger and “lifestyle entertaining expert.” Her husband, Gary Flom, used to be the president and CEO of Jaguar Land Rover Manhattan, according to Complex. However, the dealership noted on Facebook over the weekend that Gary Flom went bankrupt in 2017, and the dealership is under new ownership and management.

Svitlana Flom’s racist tantrum comes hot on the heels of Amy Cooper calling the cops on Christian Cooper, a Black man who asked her to leash her dog in Central Park. The video went viral, and Cooper subsequently got fired and had to surrender her dog back to its adoption agency. Svitlana Flom could face a similar fate, as @_brownsugarbaby’s Instagram post has over 203,000 likes and countless more views.