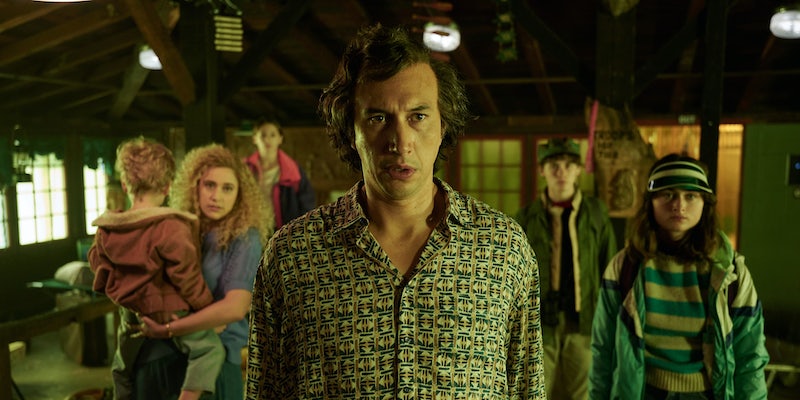 ‘White Noise’ gets lost in its own chaos

It's trying to juggle many things, much of which works.

White Noise, the adaptation of Don DeLillo’s seminal (and allegedly “unfilmable”) novel, is many things at once. It’s a postmodern satire of American consumerism and our all-consuming morbid curiosity about death and destruction. At one point, it turns into a wild disaster family movie that, despite the mysterious environmental threats that loom large over the residents of an everyday American town, never loses sight of its characters. It deals in secrets big and small, tries pulling off a noir-thriller, and is capped off with a technicolor end-credits dance sequence that partially feels as if it was designed specifically to best Netflix’s attempts to get you to watch something else the second the movie ends.

Release Date: Nov. 25, 2022 (theatrical); Dec. 30, 2022 (streaming)
Director: Noah Baumbach
Streaming: Netflix
Based on the ‘unfilmable’ satirical novel by Don DeLillo, ‘White Noise’ juggles several genres as it follows a family consumed by the inevitability of their mortality as they face an ‘airborne toxic event’ in 1980s middle America.

With writer-director Noah Baumbach (Marriage Story) taking on his first adaptation, White Noise is often an entertaining and unwieldy ball of chaos, and it’s a minor miracle that it works as long as it does. But after a strong start, it stretches itself too thin, its purview far too scattered, so by the time it raises the stakes in its final act, it’s run out of steam.

If it wasn’t evident that White Noise has death on its mind, look no further than its opening minutes spent in a lecture hall as students at College-on-the-Hill observe a series of car crashes, the reflection of its fiery consumption plays out on a students’ eyeglasses. Murray (Don Cheadle), the professor on hand, is in awe as he tells them that those “collisions are part of a long tradition of American optimism.”

That purview transfers over to the Gladney residence. Jack (Adam Driver) is a professor of Hitler studies who wears his faculty robes all the time and billows his way around the classroom and hallways with enough gusto that it makes him look like a harbinger of death (or, at the very least, serves as a strong argument that Driver would make a great movie vampire one day). Babette (Greta Gerwig), Jack’s fourth and current wife, is something of a health nut and teaches exercise classes. They have four children (three from previous marriages; the fourth is the one they had together), and the Gladneys are all captivated by death; they’re nihilistic to a fault, and the humor passed on between them is very much in gallows territory.

Heinrich (Sam Nivola), and Steffie (May Nivola) will keep their eyes on reports and absorb everything around them. Denise (Raffey Cassidy) immediately thinks the worst when Babette starts taking something and lying about what it is whenever she’s asked. Jack and Babette bicker about which of them will die first, and you can tell it’s far from the first time they’ve discussed this. There’s an easiness to the absurdity of this blended family, a testament to Driver and Gerwig as much as the actors playing their children.

As much as Jack might fear death, his bubble of existence is an easy one to manage: Work, home, grocery store, repeat. Much of the dialogue, both the quips and more colloquial musings, feels as though it was lifted straight out of DeLillo’s book. Jack might be a hit on campus with a lecture-off involving Hitler and Elvis Presley, but even his secrets—such as learning German on the down low because he doesn’t want his contemporaries to think less of him for not knowing the language—are superfluous.

All of that is upended with an explosion that’s referred to as an “Airborne Toxic Event,” an ominous disaster that’s communicated vaguely enough to be equally alarming and simple enough to dismiss. It doesn’t take a big stretch to see the connections between the ’80s-stemmed paranoia and mistrust of White Noise and the misinformation that regularly spreads online today (and in the film’s production notes, Baumbach highlighted finding the novel to be prescient no matter when he revisited it).

Even amid the hijinks, an affecting score from Danny Elfman, and the instantly catchy LCD Soundsystem song that ties the chaos together, White Noise can’t sustain itself. It doesn’t know quite what to do once it bursts the bubble the Gladneys are in or once Babette’s secret comes out into the open. The film’s threads on life, death, love, and fear are given a rudimentary nod but aren’t given the exploration they should as it gives way to its more noir-esque aesthetics.

But still, with Baumbach largely known for much smaller and more intimate films throughout his career, White Noise is a big swing. It doesn’t always land, but it’s a much more curious film to observe for pushing the envelope in the first place.

White Noise will debut in select theaters on Nov. 25 and be released on Netflix on Dec. 30.