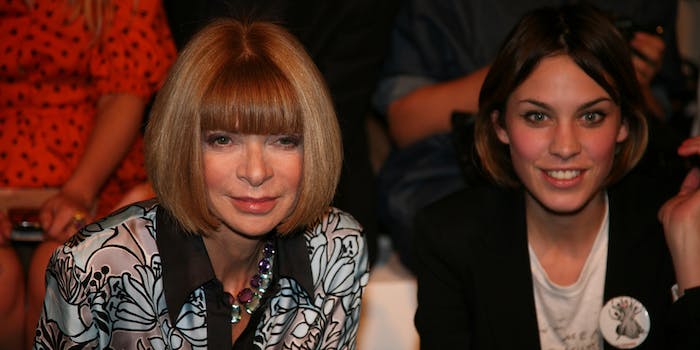 The persistence of tech-shaming says a lot about our weird relationship with our phones.

It’s a sad fact that wearing outdated clothing can make you a target for ridicule, especially among the world’s most shallow people. But what about sporting an outdated cell phone? This question was put to the test last week, when Vogue editor-in-chief (and the notorious inspiration for The Devil Wears Prada) Anna Wintour was spotted at the U.S. Open using—quelle horreur—a flip phone! Talk about a scandal, right?

Okay, maybe “scandal” is too big a word, but given how people reacted, it’s not entirely far from the truth. The idea that Wintour—fashion maven of fashion mavens, queen that of all that is stylish—would be seen using an outdated piece of technology does, in a weird way, clash with what we think about her. As more than a device, as an outright accessory, an up-to-date phone is considered an increasingly important signifier of one’s ability to stay hip and trendy. Take, for instance, a New York Times article from late August, which suggested that today’s teenagers care more about owning the latest smartphone than they do about owning the latest designer or name-brand clothing.

For the record, The Wire has, since flip-gate, pointed out that Wintour uses many different phones depending on what she’s doing, as a wide variety of other celebrities also tend to. So we can all sleep soundly again, knowing that Anna Wintour is not giving up her reigns as the world’s most fashionable person.

But seriously folks, why do people freak out so much over old cell phones? Granted, not everyone got down on Wintour—Jezebel‘s Kate Dries thanked her for “not [giving] a fuck what anyone thinks of her or her phone”—but the fact that so many people even noticed this detail raises interesting questions. Wintour is one of the most powerful, accomplished people in her field, so why should her flip phone eclipse all the other uber-chic choices she surely had made that day?

The answer is that we have a seriously weird relationship to our phones in this country, and it goes a lot deeper than iPhone vs. Android.

There’s a certain logic that would suggest a cell phone is a cell phone, no matter what added features it has; it’s a device, that we use to call people. And as opposed to the relationship between vinyl and cassettes and CDs, the actual device that we use to do that has stayed the same, despite frequent upgrades.

Except none of that is true anymore. Because no matter what device you are listening to music on, the sole point of owning said device is to listen to music on it. Smartphones, on the other hand, have (to state the painfully obvious) completely changed what the capabilities of a phone are, almost to a degree that it seems silly to continue calling them phones at all. As Kevin Roose at New York Magazine states, “These days, smartphones are phones in name only. For many of us, the green, phone-shaped icon on our home screens has become just another minor feature—like a stopwatch or a stock ticker. And for others, it’s completely irrelevant.”

That making phone calls could be “completely irrelevant” to some people sounds a bit hard to believe, yet the current trends indicate as much. In the last year, wireless companies actually started to generate more money from data charges than from actual voice calls. That said, those companies still have all the reason to push voice calling. Roose notes that their marketing is designed so that we “think of our rectangular gadgets first and foremost as phones, since what their plans give us in the phone department (unlimited minutes and texting, on most carriers) is much better than what they give us in the data department (tiered caps on data use, with charges for overage).”

But for a growing number of smartphone users, to suggest that making phone calls is the most important part of having a phone would be an archaic notion. With all that they can do, to say that the difference between a smartphone and a flip phone is vast would be an understatement. Roose contends that’s why “it’s odd to refer to these vast, all-encompassing gadgets merely as ‘phones.'” He continues, “It would be like calling a car a ‘radio box,’ or a microwave a ‘popcorn maker.’ All smartphones can make calls, sure, but what makes one device different from another is how well it can do everything else.”

Where this turns into a source of frustration is in trying to keep up. Smartphones can do amazing things, but they’re also exhausting. It’s almost as if every few years, they get exponentially better than they were a few years before, making those with older models, and especially those with (God forbid) flip phones look desperately out of touch.

This is because all technology is advancing faster than ever, and taken to the extreme, this will hit a peak with Ray Kurzweil’s idea of the singularity. But for now, the accelerated rate technology is moving manifests itself for most in the trials and tribulations of everyday life. Almost no one is exempt from this. And the most tech-savvy among us face the additional challenge of being expected to stay completely up to date at all times.

“I have found that even working in technology, it’s all too fast for me, too,” admits Lisa Hendrickson at Wired. “I think what’s moving too fast right now is smartphones, apps, the cloud and, overall, new hardware technology. Even though I work in the field, I too have a lot to read up on. I can’t spend my days following tech Twitter maniacs or the hyped up techie sites to keep up… Some days I find myself drowning in technology.”

What the overwhelming speed of technology leads to in a culture where having the latest everything is considered more and more to be a necessity rather than a luxury is a stigmatization of those who get left behind. Technology’s march forward may have brought us many wonderful things, but what about those who don’t have access to these wonders? As far as cellphones go, it doesn’t help that pop culture has determined that if you’re using a flip phone, you’re probably either a murderer or a drug dealer. Sure, it’s fairly unlikely that Anna Wintour is either of these things, but for the way people behaved, she might as well have been for a few seconds there.

The ensuing result of this stigmatization is a very specific kind of tech shaming, which has everything to do with class and status. This concept can sound kind of ridiculous at first, but it enfolds in ways we wouldn’t usually think about. The brightest, most successful among us do it on instinct, not meaning to be mean so much as not thinking about it at all. If someone like Anna Wintour can get looked down on by her peers (and in a social hierarchy sense, her lessers) by virtue of having the wrong phone, what kind of message does that send to everyone out there who truly can’t afford a smartphone? Aren’t we telling them that they’re worse for not being able to stay current?

The Daily Dot’s S.E. Smith discussed tech shaming in an article for this ain’t livin’:

Technology shaming… is very real in many progressive communities. Not just in the sense that many people like to flaunt new acquisitions, but in the way they talk about technology. There’s the sneering at people who aren’t as knowledgeable about basic software, for example; people who turn up their noses at given content management systems for blogging or can’t believe someone doesn’t know how to use a given social network… And there is the hardware shaming that goes on, too, the pitying looks for people using older computers and phones, for those who can’t afford the newest, brightest, shiniest thing when it comes out. For those who might actually choose to use an obsolete or older but still usable device simply because they believe that things should be used up and worn out rather than thrown out when they no longer glitter.

For those who have gotten accustomed to smartphones (which is many of us), and use them frequently in everyday life, it can be hard to accept that there are those out there who just don’t care to invest their money or their time in one. The flip side of this is that we’ve all heard the arguments about how terrible smartphones are and how they and the rest of technology will destroy our remaining abilities to interact with each other as real people, rather than faceless ghosts behind little screens.

But smartphones are awesome. Like much of the swell in technology over the last few decades, they can, at their best, make our lives better, easier, and more comfortable. However, that’s no reason to look down on someone who doesn’t have one. This country already has the tendency to forget how lucky we are compared to the rest of the world; it’s important to remember that in a way, any phone, including a flip phone, is a great luxury.

And besides, there are better ways to spend our time than staring at little rectangles all day, regardless of all the cool stuff we can do on them.